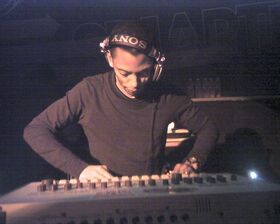 Jeff Mills (born 18 June 1963 in Detroit, Michigan) is an American techno DJ and producer. Starting in the early 1980s, Mills, using the name "The Wizard", was a recurring guest DJ on "The Electrifying Mojo" radio show on WJLB. He performed DJ tricks like beat juggling and scratching during his sets, some of which were pre-recorded.

Mills never officially left UR, but did relocate from Detroit, first to New York, then Berlin (as a resident at the Tresor club), and then Chicago. There in 1992, with fellow Detroit native Robert Hood, he set up the record label Axis, and later, sub-labels Purpose Maker, Tomorrow, and 6277, all aiming for a more minimal sound than most of the techno being produced in those years.

In his DJ sets, Mills usually uses three decks, a Roland TR-909 drum-machine, and up to seventy records in one hour. ... (Read more at Wikipedia.)

Peel discovered Jeff Mills through the Underground Resistance label in 1993. Throughout the time, Peel and Mills became close friends and Peel interviewed Mills for the Fact magazine in 2003. The interview took place via the interview: [1]

John Peel: Hello again. It seems we have some questions to ask each other… I’ll reply to you in bold… hope all is well, John.

Jeff Mills: Hello John. Hope you had a good week and are looking forward to the weekend.

JP: You’re playing for half an hour at my wedding. What five records would you play, and why?

JM: Hmm. This is a tough one – just 30 minutes. OK. Let’s see. First, I’d start with ‘Love and Happiness’ by Al Green – why? This is what I would wish you and your new bride the most. ‘Lead Boots’ by Jeff Beck – why? Because it’s just a cool ass track. ‘Stairway to Heaven’ by Led Zeppelin – why? It’s a long track that requires patience, it fluctuates. A lot like marriage. ‘In Cars’ by Gary Numan – why? A wise man once said, “when a man opens the car door for his wife, it’s either a new car or a new wife.”

JP: I’d play… Mackenzie Brothers, ‘Rebel Mind’ – It’s just so uncool that Jeff would be horrified – he’d think it was trash… but sometimes trash is ok. The Four Tops, ‘I Just Can’t Help Myself – it’s just the most irresistible record. Tanto Metro & Devonte, ‘Thug Party’. The Undertones, ‘Teenage Kicks’ – it’s a million miles away from Jeff’s interest but I always play it in a set. Pepe Kalle, ‘Roger Milla’.

JM: What’s your most memorable experience of playing at an illegal party?

JP: I’ve never done one… I don’t really want to do legal ones let alone illegal ones. I’d sooner have a lie down and watch the football.

JM: I suppose the most memorable would be in an illegal club in Berlin in the early ’90s. The building was bombed out from WW2 but most of the basement was intact. Water dripping, electrical line patched for the night. The people were the most unusual I’d ever seen. It was like walking onto a different planet – I loved it.

JP: What’s your most treasured possession?

JM: And how much would you sell it for?

JP: I wouldn’t sell it! You’ve got but one choice: lose your entire record collection or never DJ again?

JM: I’d choose to lose the records. From what I can see, there is something much more that people gain from music other than the format it’s served upon. The memories that go with music are priceless. For instance, I really can’t remember what I played the last time I did your Peel Session but I can certainly remember the situation. Things like coming to say “hello” or talking with the sound engineer about who performed in that studio decades ago.

JM: You’re in charge of your own radio station for a day. What DJs would you book to play (they can be alive or dead) and why?

JP: I’d book Jeff Mills of course! Mark & Lard – because they make me laugh! Keith Skues – he was on pirate radio with me in 1967… he’s now on Three Counties Radio in East Anglia I think… I’ve not heard him for a long time. I like him because it’s as thought the last 40 years or so hasn’t happened – he refers to anything with a beat as “hooligan music”! He also gave me the idea for our ‘Pig’s Big 78′ feature. [John's wife – 'The Pig' – introduces old 78 records on the show.] My friend Paul Milla from KOMA (American radio in the ’60s) – just because I’d like to see him again. Bobby and Nihal from Radio 1 because I really like their music but I never get to hear the show because it’s on too late.

JM: For me it’d be Larry Levan – because of what he’s lived through and his knowledge about music. Grandmaster Theodore – Theodore was the first master of the scratch and cut. Juan Atkins – because Juan is the creator of Detroit techno. Also, he possesses the mind that could create something incredible like ‘Cosmic Cars’. Larry Heard or Marshall Jefferson – because of their huge influence on the foundations of house music.

JP: What was the first record you bought?

JM: A 45 RPM A-side: Elton John ‘Philadelphia Freedom’ and B-side: ‘Love Is The Message’ by MSFB.

JP: Mine was ‘Blue Tango’ by Ray Martin & His Concert Orchestra (that’s so uncool that it’s perhaps coming round to be cool again?).

JP: The Blues Brothers, or Return of the Living Dead.

JP: O Brother Where Art Thou?

JP: I’ve got a lot of pockets… a restaurant receipt, a key to my tawdry hotel room, 2 record middles, 6 identical pens – the more I have the more anxious it means I’m feeling (I once had 13!), £150 – just had a result from the hole in the wall, notebook with no notes in it, lots of bits of paper with loads of notes on, list of records people in the office asked me to get for them from Rough Trade, car keys, dirty tissues, peppermints.

JM: If you caught the thief that stole your favourite record red-handed, what punishment would you want doled out.

JP: Very similar… one of my favourites is the alcohol fuel that they used to use in racing cars… I also love the smell of that screen printing that you sometimes get on record sleeves.

JM: Have any of your fans ever become friends?

JP: I don’t really think of listeners as ‘fans’ but the main reason for doing it is for them… dozens of names in our address book are people we met through the programme.

JM: I think DJing is different to other forms of entertainment. There doesn’t seem to be much distance between the listeners and DJs. It’s only portrayed that way in the media and magazines.

JP: What about your five all-time favourite records?

JM: (Not in any order.) ‘Numbers’ by Kraftwerk. ‘Clear’ by Juan Atkins. ‘X-102 The Rings of Saturn’ by Underground Resistance. ‘Klang der Familie’ by 3Phase. ‘Glen21′ by myself.

JP: ‘Teenage Kicks’ by The Undertones the records that are on my Fabric compilation. Whose face would you want on the £50/$100 bill?

JM: Not anyone’s face but rather an image of the sun. As it provides and causes things to grow (not always in a positive way) and money serves that same ability. I think this would be the most appropriate symbol.

Four sessions, including one with Laurent Garnier, all DJ sets live at Maida Vale. No known commercial release. #3 selected in Peel Sessions: The Best 125.