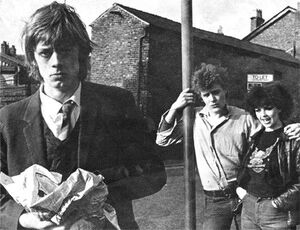 "Well, whoever it is who is writing all of these letters, don't bother to send me any more because I've got the message. That's Jilted John on Rabid Records. It will be when it's issued anyway - this is still like an advance pressing thing - and the song is called Jilted John as well." [1]

Jilted John was the pseudonym of Graham Fellows, a drama student at Manchester Polytechnic when he first came to prominence in August 1978 as the eponymous singer of the novelty record. It was a first-person narrative of an embittered teenager whose girlfriend Julie had left him for another man named Gordon, "just 'cause he's better lookin' than me, just 'cause he's cool and trendy". The song became known for the refrain "Gordon is a moron" repeated several times.

Fellows later said: "I'd written a couple of songs and I wanted to record them. So I went into a local record shop and asked if they knew any indie or punk labels. They said there were two, Stiff in London and Rabid just down the road. So I phoned Rabid up, and they told me to send in a demo. We did the demos with the late Colin Goddard – of Walter & the Softies – on guitar, and the drummer and bass player of the Smirks. I took it along to Rabid, who loved it ... so we re-recorded it a few days later, at Pennine Studios, with John Scott playing guitar and bass and Martin Zero (aka Martin Hannett) producing." The single, issued by Rabid in April 1978 (TOSH 105), featured "Going Steady" as the A-side and "Jilted John" as the B-side.

Following JP's promotion of the song, it was introduced by David Jensen on Top of the Pops as "one of the most bizarre singles of the decade", and reached number 4 in the UK Singles Chart.

Two follow-up singles were released the same year under the guise of "Gordon the Moron". A pseudo concept-album also produced by Hannett followed, entitled True Love Stories, charting John's love-life – and two further singles, neither of which was a hit. No other recordings followed these, making Jilted John a one-hit wonder. However, a cash-in single by Julie and Gordon sold moderately well, as did lapel badges bearing the legends "Gordon is a moron" and "Gordon is not a moron".

In later years, Fellows gained new fame as the creator of comic character John Shuttleworth, but has recently revived the Jilted John persona, taking it on a national tour in 2018.

Peel is credited with being the first DJ to play Jilted John, stating that if it was picked up by a major label it could become a huge hit. When this eventually happened, Peel continued to play it, and again when reviewing the Ripped And Torn chart, being surprised that it made top spot. On revisiting the track some seven years later, he expressed the opinion that it had not worn well with time.

Retrieved from "https://peel.fandom.com/wiki/Jilted_John?oldid=239463"
Community content is available under CC-BY-SA unless otherwise noted.