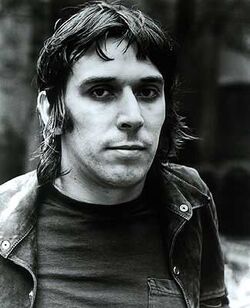 John Davies Cale, OBE (born 9 March 1942) is a Welsh musician, composer, singer-songwriter and record producer who was a founding member of the experimental rock band the Velvet Underground. Though best known for his work in rock music, Cale has worked in various genres including drone and classical, and studied music at Goldsmiths College, University of London. Since departing from the Velvet Underground in 1968 he has released approximately 30 albums. Of his solo work, Cale is perhaps best known for his album Paris 1919, and his cover version of Leonard Cohen's "Hallelujah", plus his mid-1970s Island Records trilogy of albums: Fear, Slow Dazzle, and Helen of Troy. Cale has produced or collaborated with Lou Reed, Nico, La Monte Young, John Cage, Terry Riley, Hector Zazou, Cranes, Nick Drake, Mike Heron, Kevin Ayers, Brian Eno, Patti Smith, Stooges, Lio, Modern Lovers, Art Bergmann, Manic Street Preachers and frontman James Dean Bradfield, Marc Almond, Element of Crime, Squeeze, Happy Mondays, LCD Soundsystem, Replacements, and Siouxsie and the Banshees. Cale was inducted into the Rock and Roll Hall of Fame as member of the Velvet Underground in 1996, and appointed Officer of the Order of the British Empire in 2010.

As a fan of the Velvet Underground, Peel was keen on material from ex-members of the band and played plenty of it, once Cale, Lou Reed and Nico were establishing their own solo careers. Cale and Nico both signed for Island Records in the mid-1970s, when former Melody Maker journalist Richard Williams, who had enthused over the Velvet Underground in reviews and articles for the paper, was in charge of A&R for the label. As a result, both artists spent time in London and recorded sessions for Peel. In 2012, ten of John Cale's LPs were among the first 100 albums by artists beginning with C when details of Peel’s record collection were initially released via TheSpace website. (See Record Collection: C.)

Retrieved from "https://peel.fandom.com/wiki/John_Cale?oldid=249368"
Community content is available under CC-BY-SA unless otherwise noted.