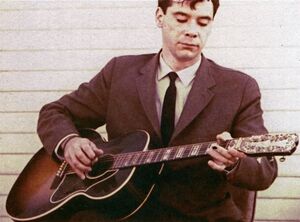 "On Clive Selwood's elderly gramophone revolves one of the amazing records of John Fahey. I'm not sure in how many places in London you can obtain these essential jewels....but I know you can find them at Chris Wellard's shop in New Cross. Please don't talk them into selling you the LPs they're holding for me."
(Peel in his Perfumed Garden column in International Times, December 15th-28th, 1967)

John Fahey (1939-2001) was an influential American guitarist who was also a record collector, a folk and blues scholar and a record label owner. He developed a style which he called "American Primitive Guitar", drawing heavily on the earlier US music forms which fascinated him, from country blues and old-time white country music to American "parlor guitar" of the nineteenth century. He was a member of the network of collectors who unearthed obscure 78 rpm records from the 1920s and 1930s and rediscovered long-forgotten but significant performers such as Son House, Skip James and Bukka White.

His first, self-produced, recordings were inspired by early blues, introducing his alter ego Blind Joe Death and his habit of writing lengthy LP sleevenotes full of private jokes and cod scholarship. Yet his own music was more than mere blues revivalism, subsequent albums for his own Takoma label illustrating a wider range of musical influences, ranging from twentieth-century Western classical music to elements of the Indian, Chinese and Latin American traditions.

By the mid-1970s Fahey was an established cult figure, even recording a couple of albums for Warner/Reprise, the first of which, Of Rivers And Religion, gained considerable press acclaim. This was not matched by record sales and the label dropped Fahey, but he continued to release new material on Takoma Records. In the late 1980s his career was affected by serious illness and he fell into poverty and obscurity, reportedly supporting himself by selling old records he had found in thrift stores.

The 1990s saw a revival of interest in his work, as a new generation of listeners, including contemparary performers Sonic Youth, Jim O'Rourke and Cul De Sac, provided him with the attention and support to restart his career. His new music was in sharp contrast to the records which had made his name, being electric, experimental and harsh, and alienating some of his previous audience. Deapite this he was able to continue performing and recording until his final illness, with numerous reissues of his earlier work consolidating his reputation.

Once again, Fahey founded a record label, Revenant Records, whose releases included reissues of vintage pre-World War Two blues and country music. The most notable of these were a 7-CD set of the complete recorded works of seminal Mississippi bluesman Charley Patton and the "missing" fourth and final volume of Harry Smith's Anthology of American Folk Music, the collection which had done so much to shape the US folk revival at the time when Fahey was beginning his career. Other Revenant releases reflected his interest in various types of avant-garde music, including a collection of previously unissued material by Captain Beefheart And His Magic Band.

A prolific and sometimes eccentric writer, Fahey also published several books, including a study of the music of Charley Patton, which appeared in the UK in 1970 as one of Studio Vista's Blues Paperbacks series and has since become a collector's item [1]. He remains a revered cult figure with a committed following, as is shown by the websites devoted to his work.

The lengthy sleevenotes[2] to Fahey's album The Great San Bernardino Birthday Party And Other Excursions are written in Fahey's own private language, which is hard to decipher, but they seem to describe how the guitarist drove to San Bernardino, believing he would play at a friend's birthday party, but found that she had arranged a public performance, as a result of which he may (or may not) have got drunk and behaved disgracefully. There are also references to a radio station in San Bernardino, but it appears to be a community radio station playing non-commercial folk music like Fahey's, rather than a pop station like Peel's then employer KMEN. The album was issued in 1966, when Peel was living in San Bernardino and Fahey was based on the West Coast, so it is possible that Peel might have heard of the guitarist during his time in the US; but as far as is known, the DJ only discovered Fahey's music in late 1967, after he had returned to London.

Peel wrote appreciatively of Fahey's work in his International Times column (see quote above) and played tracks by him on Top Gear and Night Ride. The DJ's enthusiasm for Fahey's music led to the release of several of his albums - The Transfiguration of Blind Joe Death, Blind Joe Death, Death Chants, Breakdowns and Military Waltzes, The Yellow Princess - in the UK during 1968 and 1969, and to a tour in 1969, which included a session for Night Ride, with some of the tracks being played on the following Sunday's Top Gear. Peel served as Fahey's driver during this tour, according to his wife Sheila's account in Margrave of the Marshes. Fahey expressed his gratitude by sending Peel a mint Blind Lemon Jefferson 78 as a Christmas present.

On his show of March 31, 1986, Peel said he'd "only just found out that John Fahey had died last year" - which turned out to be untrue. He continued to feature Fahey's music on his shows in subsequent years, and "Sail Away Ladies", from The Great San Bernardino Birthday Party And Other Excursions, was included in the 1965 Peelenium. The last documented play of a track by the guitarist was in December 2003 (see below).

("One of my most prized possessions," says JP, who only plays a short extract from this 6-minute track. "One of these days I shall lock myself in here and play all of that...Music for playing to your friends late at night...")

(JP: 'A lovely player, and I wish he was still making records. He had a 78 out, actually, recently, which was kind of OK, you know, just noodling, but not a lot of tune. With John Fahey stuff, I like a tune.')

Retrieved from "https://peel.fandom.com/wiki/John_Fahey?oldid=252843"
Community content is available under CC-BY-SA unless otherwise noted.