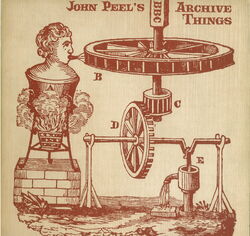 (As per the style of the album cover, which gives a basic title and place of origin for each track, as well as a brief description. Many of the artists were unknown.)

Retrieved from "https://peel.fandom.com/wiki/John_Peel%27s_Archive_Things?oldid=247253"
Community content is available under CC-BY-SA unless otherwise noted.