The John Peel Lecture is an ongoing series of talks by noted figures in the music industry: they are intended to give an insight into the state of broadcasting into the 21st century. The lectures have been organised by BBC Radio 6 Music and have all been broadcast on air and recorded on video.

The first artist invited to give a lecture was Pete Townshend of the Who: even though he admitted that he and Peel were not close, he was apparently more than happy to deliver it.

"I am honoured to be invited to deliver Radio 6Music’s John Peel Lecture. Through John's shows I first heard artists like the Jesus and Mary Chain, the Undertones (and) the Proclaimers before they had record contracts. John didn't just listen to music, he played it on air and let his audience decide. He was a listener first, and an activist second, and I am happy to have a chance to honour him and examine how his legacy might extend into the future." [1]

The lecture took place at the Lowry Theatre, Salford on October 31st 2011 and was introduced by Tom Ravenscroft. Townshend's theme was, "Can John Peelism survive the Internet?," examining the impact the Web has had on the kind of music that John championed. 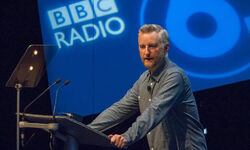 The following year, Lauren Laverne hosted the second lecture, which was delivered on 12 November at the same venue by Billy Bragg. He commented:

"John Peel gave me my first big break in return for a biryani and he was always hugely supportive of my work. He was a complete hero to the music industry and I'm delighted to be asked to speak at the event in his honour." [2]

Bragg's theme was how pirate DJs and ideas became mainstream, and was followed by a Q&A session with the audience. The text of the lecture included his own views on the Government's plan to scrap GCSEs.

The third Peel lecture was delivered in Salford on October 14 2013 by opera/pop singer Charlotte Church and focused on the representation of women in music. 6Music's head of programmes, James Stirling, said that the lecture "encapsulates the opinionated spirit of 6Music." [3] Church criticised pop music's juvenile attitude toward sexuality, and concluded:

"If the power was taken away from sex in pop by making it harder for younger viewers to access it, then maybe the focus would shift to making works of artistic beauty and conscience."

Church discussed the subject matter on Radio 4's Woman Hour (12 October 2013) in which she was critical of the way her pop material had been portrayed on the song videos. [4]

The fourth Peel lecture was delivered live from the Lowry Theatre in Salford on October 13 2014 by Iggy Pop, former leader of the Stooges, and was titled Free Music In A Capitalist Society. Pop began by paying tribute to Peel's influence:

"When I was a boy, I used to sit for hours suffering through the entire US radio top 40 waiting for that one song by the Beatles and the other one by the Kinks. Had there been anything like John Peel available in my Midwestern town I would have been thrilled. So it's an honor to be here. I understand that. I appreciate it."

He then averred that record companies continually exploited their artists and deserved in turn their exploitation by the public in the digital age:

"Thanks to digital advances, we have a very large industry, which is laughably maybe almost entirely pirate so nobody can collect shit. Well, it was to be expected. Everybody made a lot of money reselling all of recorded musical history in CD form back in the 90s, but now the cat is out of the bag and the new electronic devices which estrange people from their morals also make it easier to steal music than to pay for it. So there's gonna be a correction."

The fifth Peel lecture was introduced by Mark Radcliffe and delivered by musician Brian Eno during the Radio Academy's Radio Festival at the British Library on 27 September 2015. He commented:

"(Peel) had a profound effect on my musical life and indeed my becoming a musician at all....His career as a non-musician who altered the course of music has been an inspiration to me and forms the basis of this talk."

His lecture attempted a definition of art:

"I want to talk about two questions tonight. The first one is, is art a luxury? Is it only a luxury or does it do something for us beyond that? And the second question is, is there a way that you can create a situation in which the arts flourish. If you think they’re important, perhaps you should be encouraging them in some way. So those are the two things I’m going to address: now to address those I have to come round it in quite a long way around. Essentially I think we need to rethink how we talk about culture: rethink what we think it does for us and what it actually is."

It was broadcast on BBC 6 Music and BBC4.