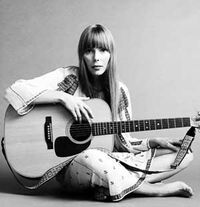 Joni Mitchell (1943- ) is a Canadian singer / songwriter, born Roberta Joan Anderson. She was sometimes regarded, erroneously, as a rather twee singer of folksy anthems such as Both Sides Now and Chelsea Morning, the first of which was a hit single for Judy Collins and the latter included on Fairport Convention's eponymous début LP. Her reputation as a songwriter preceded her first LP in 1968, yet her roots are not in the hippy era but in an older tradition of bohemianism, taking in the jazz and folk scenes of New York's Greenwich Village as well as her own training in the fine arts. She became associated by default with the "Woodstock generation" through her connections with the likes of Crosby, Stills and Nash (Clive James observed that she had been the partner of each of them, although not necessarly in that order) and her appearances at many of the big open-air pop festivals of the era, although not Woodstock itself. Matthews Southern Comfort covered her song Woodstock in a soft rock style and took it to number 1, but her only UK chart hit was the environmentally conscious Big Yellow Taxi (1970), which almost cracked the Top 10. Nazareth also hit the charts with This Flight Tonight from Blue. However, she is far better known to British audiences for her ground-breaking albums, which range from sparse, emotionally naked drama (Blue) to full-blown jazz experimentation (Mingus). She made her life the template for her lyrics, writing songs that related her experience of giving a daughter up for adoption, her relationships, and issues such as televangelism and the treatment of Native Americans. She retired from the music scene after the 2007 album Shine.

Joni Mitchell songs were first heard on Top Gear in versions by other artists. Fairport Convention included a couple of her songs on their first album and recorded "Chelsea Morning" for their first Peel session in late 1967. Tom Rush, on a brief visit to the UK in early 1968 to promote his LP The Circle Game, a "concept album" including three Joni Mitchell songs, recorded a session for Top Gear featuring tracks from the LP, among them Mitchell's "Tin Angel".

Later in 1968 she visited the UK after her first LP was released; Peel saw her perform at the Royal Festival Hall and she made an appearance in session on Top Gear, singing "Chelsea Morning" before it had even appeared on Clouds (1969). On this track and "Night In The City" she was accompanied by jazz flautist Harold McNair and Pentangle bassist Danny Thompson, who, as members of the John Cameron Group, had added jazz- and pop-influenced arrangements to some of the Donovan records Peel had admired so much. When the session was broadcast, JP was full of praise for it and for her Festival Hall performance, saying he hoped to have her back in session when she returned to Britain later that year, but this never materialised.

After "Woodstock" she became a star of the era, and in 1970 and 1971 she recorded two In Concert programmes for Radio One, with very similar set lists and guest appearances by James Taylor, another major figure of the singer-songwriter boom of the early 1970s. Peel introduced the 1970 concert.

While her earlier work on LPs such as Song To A Seagull and Ladies Of The Canyon chimed effortlessly with Peel's folk leanings at the time, he felt that she had lost her way in the LPs she subsequently recorded while aiming for a jazz / rock fusion that rejected her folk roots. However:

"I have never been a great admirer of Joni Mitchell's work, feeling that the considerable promise of her earlier work had disintegrated into a James Taylor-like welter of self-pity and self-indulgence. However, her recently released LP, 'The Hissing Of Summer Lawns,' is magnificent." (1975, Searching For Stars, from The Listener, 1975-12-25 and 1976-01-01, reprinted in Olivetti Chronicles, Corgi edition, 2008, p. 247).

Consequently, he featured the LP heavily in his shows during the last week of November 1975, naming it one of his 1975 Records Of The Year, and a year later devoted an entire show to Hejira, a slower and more reflective effort than her previous opus. That album was one of his 1976 Top Ten Albums. It is significant that this came a few days after Anarchy In The U.K. was first played, and Peel subsequently turned his attention in other directions - although it didn't prevent him from featuring a number of tracks from the singer's Don Juan's Reckless Daughter album in January 1978 . Mitchell remained a favourite of Peel's cohort Andy Kershaw, who listed Carey (from Blue) as one of his Desert Island Discs.

This listing is incomplete, due to a lack of available playlists from the late 1960s and early 1970s. Please add other details if known.