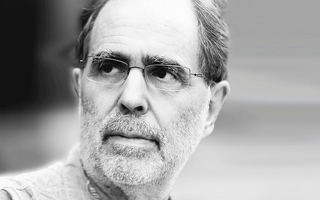 Joshua Rifkin (1944- ) is an American conductor, keyboard player and musicologist. To the general public, he is most well-known for issuing three albums of ragtime music by Scott Joplin which presented the music as he believed it should have been played: at a steady tempo that allowed the melodies room to breathe. Issued on the Nonesuch label, the first (Scott Joplin: Piano Rags) became the label's first million-selling record. However it was when ragtime was used as the backdrop to the hugely popular film The Sting (1973) that Rifkin's role in bringing ragtime to a mass audience came to be appreciated, even though none of his performances were used. Two of the most popular rags, Maple Leaf and The Entertainer were issued as a single in 1974 (undoubtedly to capitalise on the ragtime vogue) but failed to chart in the UK.

Aside from this, Rifkin is respected for his novel theories as to how Bach's music was performed, and he created arrangements for Judy Collins's LPs In My Life and Wildflowers. (He was insistent that the musicians on the In My Life album, recorded in London, would need to be classically trained players from leading orchestras, who had resisted the lure of pop sessions and adverts.) [1] He also performed with the Even Dozen Jug Band and re-imagined pop music in an 18th century manner in the LP The Baroque Beatles Book.. He is currently a Professor of Music at Boston University.

Before coming to Peel's attention, Rifkin recorded an LP with the Even Dozen Jug Band, which included a number of musicians who would later feature in Peel's late 1960s playlists - Stefan Grossman (who did a Night Ride session and became a UK resident for several years), John Sebastian (leader of the Lovin' Spoonful), Steve Katz (Blues Project) and David Grisman (Earth Opera). Peel featured tracks from the Judy Collins LPs with Rifkin arrangements on his shows, particularly In My Life, which was a staple of the Perfumed Garden.

Peel had already played Rifkin's own records in the early 70s, but the association with Joplin's music and The Sting were doubtless the reason why he was booked for a session at the end of 1973. His connections with Elektra, a favourite label of Peel's and the parent company of Nonesuch at the time, may also have played a role. He performed two tracks from the third Nonesuch LP (which appeared the following year), but one (Searchlight Rag) does not appear on any of his Joplin records, and another (Sugar Love) may have been a mistakenly named rag called Sugar Cane.

Retrieved from "https://peel.fandom.com/wiki/Joshua_Rifkin?oldid=122960"
Community content is available under CC-BY-SA unless otherwise noted.