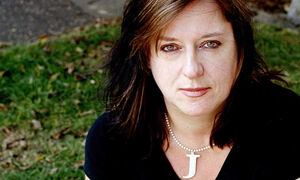 Julie Burchill (born 3 July 1959) is a controversial English writer, who started work for the New Musical Express at the age of 17, she has written for newspapers such as The Sunday Times and The Guardian. She has several times been involved in legal action resulting from her work. She is also an author and novelist and her 2004 novel Sugar Rush was adapted for television. Her controversial articles have included being happy that her parents were dead [1] and accusing John Lennon of being a wife beater, gay basher and an anti-semite. [2]

In 1999, Julie Burchill controversially wrote an article called Rake's Progress accusing John Peel of being a racist because he played punk music in the late 70's, which was predominantly followed by white people. Of course this was false, as Peel regularly played reggae during that time as well, whose music was made and supported by black people. Peel fought back against the allegation and sarcastically mentioned on his show on 06 October 1999:

"(The QEH concert was) an event which got a good review in the Guardian, and I was quite pleased about that. They failed to point out on this occasion the racist policies that determine the music that goes into these programmes, because they had a perfect opportunity to do so, because Lonnie Donegan is white, and so are the members of Half Man Half Biscuit: well, more a kind of liverish pink, to be perfectly honest, but certainly that is the case, and an opportunity missed there."

On the same article, she also accused him of being a pedophile by marrying a 15 year old and accepting sexual favours from young girls. In reality, in both instances, Peel was unaware of the girls' ages and did not proactively look for females who were underage. [1] Also, Burchill accused Peel of hosting "schoolgirl of the year" beauty contests on the radio, not pausing to reflect on the impracticality of such an event. In any case, there is no evidence to suggest that these ever took place aside from one jokey picture of JP dressed in this fashion.

In an article published on the Guardian on 23rd July 2000, where Peel was interviewed, he mentioned:

"A lot of the things Julie Burchill writes I kind of agree with," he says gloomily. "But then she goes off on one, and it kind of undervalues all the other stuff she's written. I hate being misrepresented."

He later expanded on this:

"Obviously if you’ve got a fair criticism I’ve no objection to that at all. What disturbed me was the fact that she just lied, really. She said, for example, that the programme (and this was repeated by some other geezer writing for the same paper a few months later) had a ‘whites-only’ music policy. Anyone listening to the programme would know that this was completely untrue. I got a really nice letter from a guy called Noel at Dub Vendor Records who has supplied me with reggae records for years, explaining he’d written to the paper in question, saying I’d been playing reggae records since 1968, and most of them have performances from black artists and, what’s more, I paid him for the records too. But of course they didn’t print that. The trouble is that Julie Burchill does make some good points occasionally but because she can’t resist the cheap shot she invalidates a lot of them. There was one piece where she said ‘The three most hated people of the 20th Century were Hitler, Idi Amin or someone, and David Baddiel.' Thing is, you may not like David Baddiel but he’s not really on a par with Hitler or whoever the other person was. In order to make a joke or to ridicule somebody of whom she disapproves, she’s prepared to invalidate what are actually quite good arguments. She can’t resist that and she’d be a much better writer if she could." [2]

Since Peel's death in 2004 and the recent scandal on Jimmy Savile, she has neglected to take the opportunity to write an article on him: her former paper the Mail, however, made an abortive attempt to link the deceased DJs.