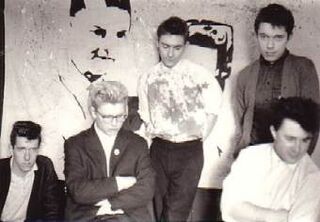 The June Brides are an English indie pop group, formed in London in 1983, by Phil Wilson and Simon Beesley of International Rescue. Influenced by Postcard-label bands such as Josef K and punk-era bands such as Buzzcocks, The Desperate Bicycles and The Television Personalities, their mix of guitar pop with viola and trumpet formed a blueprint for many of the indie pop bands that would follow.

After forming in June 1983, they first played live as a band in August that year, soon attracting the attention of future Creation Records boss Alan McGee who gave them several gigs at the now famous 'Living Room', but reputedly decided not to sign The June Brides to his new label as it would have been "too obvious". Two Joe Foster-produced 1984 singles on The Pink Label, "In The Rain" and "Every Conversation" saw The June Brides receive much attention and these two songs appeared frequently on compilation albums from that era. A year later, the mini-album There Are Eight Million Stories... appeared (produced by John O'Neill of That Petrol Emotion) and went straight to number one in the UK Indie Chart, staying there for a month. The album remained in the indie chart for 38 weeks. Disillusioned with Pink, the band moved to Marc Riley's In-Tape label for two further singles - "No Place Like Home" and "This Town" and in 1986 opened for The Smiths on their Irish tour dates.

The June Brides were asked to contribute to the NME's C86 compilation but declined for fear of being pigeonholed. After losing confidence in In-Tape, they approached Go! Discs, who had offered them a deal the previous year, but with the band falling out of favour with critics and some of their early fans, Go! Discs were no longer interested. The band split in 1986, with singer Wilson embarking on a solo career on Creation Records, but reformed in 2012...(Read more)

The June Brides recorded one session for Peel before their premature implosion. When it was issued a year later on Strange Fruit, it received good airplay from John: as Wilson related,

However, JP felt no urge to revisit their material subsequently. Beesley declared in a 2005 interview [2]:

"It was difficult to get exposure. There was no radio play, apart from John Peel and Janice Long, although I remember Simon Bates once played one of our tracks on Radio 1. I thought it was our big breakthrough to the mainstream, but I think he was told to play us by an up-and-coming producer. Put it this way, he wasn't full of enthusiasm!"