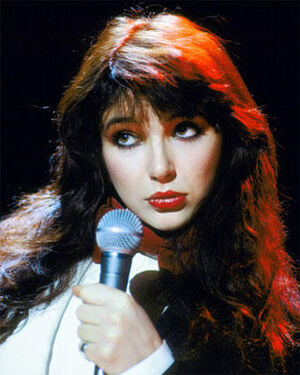 Catherine "Kate" Bush, CBE (born 30 July 1958) is an English singer-songwriter, musician and record producer. Her eclectic musical style and idiosyncratic vocal style have made her one of the United Kingdom's most successful solo female performers of the past 35 years.  In 1978, at the age of 19, Bush topped the UK Singles Chart for four weeks with her debut single "Wuthering Heights", becoming the first woman to have a UK number one with a self-written song. She has since released ten albums, three of which topped the UK Albums Chart. She has had 25 UK Top 40 hit singles, including the Top 10 hits "Wuthering Heights", "The Man with the Child in His Eyes", "Babooshka", "Running Up that Hill", "Don't Give Up" (a duet with Peter Gabriel) and "King of the Mountain". In 1987, she won a Brit Award for Best British Female Solo Artist, and in 2002, her songwriting ability was recognised with an Ivor Novello Award for Outstanding Contribution to British Music. During the course of her career, she has also been nominated for three Grammy Awards. After her 1979 tour – the only concert tour of her career until 2014 – Bush released the 1980 album "Never for Ever", which made her the first British solo female artist to top the UK album charts and the first female artist ever to enter the album chart at Number 1. She is also the first (and to date only) female artist to have Top 5 albums in the UK charts in five successive decades.  Bush was appointed Commander of the Most Excellent Order of the British Empire (CBE) in the 2013 New Year Honours for services to music. She received the award from Queen Elizabeth II on 10 April 2013 at Windsor Castle.

The young Kate Bush would probably have listened to Peel's shows, as she is reported to have spent her teenage years running an Incredible String Band fan club. However, Peel was not keen on Kate Bush's music: he was once quoted as saying he never took her music seriously with her falsetto voice. This perhaps reflects the fact that she was widely distrusted in post-punk culture and seen as too proggy/hippie-ish, a suspicion largely forgotten (and forgiven) later. His dislike of her music may also have to do with his dislike of opera with falsetto vocals. When reviewing the Reading Festival in 1995, Peel wrote in the Guardian (later reprinted in the Olivetti Chronicles):

"The global success of Björk has been built on her exotic background, the projection of herself as plain weird and a singing style so mannered as to make Kate Bush sound pedestrian by comparison."

Peel and Bush had appeared together on the 30 June 1978 show of Round Table, along with Kid Jensen. When Peel came back to that program on 03 November 1978, with Paul Gambaccini and Julie Covington, he recalled the event and described her as "charming". However, that didn't change much his opinion of her music as his review of Bush's then current single "Hammer Horror" was quite lukewarm. On record, Peel did play some Kate Bush tracks on his own show ("Violin", purposely at the wrong speed, and a Christmas jingle she recorded for BBC Radio One, which mentioned the lyrics of "come see John Peel eating his pudding"), but would generally ignore requests by his listeners, as evidenced on 16 February 1983 (BFBS), when he reacted derisively to a letter that asked him to feature more music by the singer. When punk band China Drum covered her hit "Wuthering Heights" Peel sometimes featured it in the show, specifically saying on 06 May 1995 (BFBS) that "happily" it was "not sung" by Bush herself.

After Peel's death in 2004, Rob Da Bank took over the Thursday evening slot. When Kate Bush released her "Aerial" album in 2005 after an absence of twelve years, he enthusiastically played her "King Of The Mountain" single and called the track "vintage vintage Kate Bush" [1]. The single ultimately reached number 42 on the 2005 Festive Fifty, hosted by Rob Da Bank and Huw Stephens.

Retrieved from "https://peel.fandom.com/wiki/Kate_Bush?oldid=222498"
Community content is available under CC-BY-SA unless otherwise noted.