Ken Nordine (April 13, 1920 – February 16, 2019) was an American voice-over and recording artist, best known for his series of Word Jazz albums. His deep, resonant voice has also been featured in many commercial advertisements and movie trailers. (Read more at Wikipedia.)

Peel seems to have become aware of the work of Ken Nordine in 1979, when a listener from Manchester sent the DJ a copy of the “Colors: A Sensuous Listening Experience” album as a 40th birthday present, on the basis that it was the worst LP he had ever heard.[1] 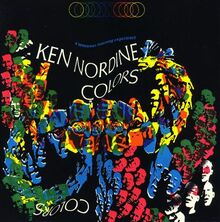 Originally released in 1966, the record had grown out of a series of radio commercials for a paint company and consisted of a series of short spoken odes to assorted colours, each narrated by Nordine over a jazzy musical backdrop.[2] "Really is hideous," proclaimed Peel, to whet the appetite of listeners. After playing the track 'Blue’, he read out a snippet from the sleevenotes:

"Ken Nordine exists on the fringes of atrophying 20th century perception. He is one of the few adults to realise knowledge means more than squashing reality into super-phisticated nonsense. This record strikes an enlightening blow for the forces of actuality."

Perhaps unsurprisingly, little more was heard from Nordine on Peel's shows for many years. In the mid-1990s, however, an expanded version of the “Colors” album was reissued by the Asphodel label, and a number of tracks found their way onto his programmes.

On 05 January 1996, the DJ informed listeners that he had noticed another Nordine collection in a record company catalogue and was thinking about buying it, in order to “delight you with one or two tracks from that as well.” Available show tracklistings, though, suggest that he resisted this temptation.

Ken Nordine was last heard on the Peel wingding on 02 March 2000, when the "word jazz" pioneer's narration on the DJ Food track “The Ageing Young Rebel” inspired JP to dig out “Colors” and play 'Burgundy'.

Retrieved from "https://peel.fandom.com/wiki/Ken_Nordine?oldid=214666"
Community content is available under CC-BY-SA unless otherwise noted.