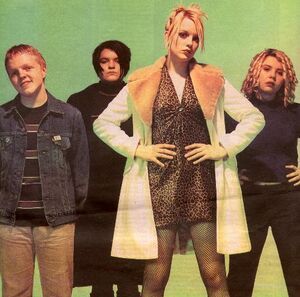 Kenickie was an English four-piece indie band from Sunderland, England. The band was formed in 1994 and consisted of lead vocalist, guitarist and lyricist Lauren Laverne [real name Lauren Cecilia Fisher (née Gofton)], drummer Johnny X (real name Pete Gofton, Lauren's brother), lead guitarist and occasional lead vocalist Marie du Santiago (b. Anne Marie Nixon) and bass guitarist Emmy-Kate Montrose (b. Emma Jackson). The band's name comes from their favourite character in the 1970s film Grease. The group split up in 1998, with Lauren Laverne, the singer, later on forming a broadcasting career, where she currently presents a show on BBC2's The Culture Show and her own show on BBC 6 Music. The group in their career had a UK Top Ten album called At The Club and several singles in the UK Top 40 Singles Chart between 1997 and 1998.

The band were regularly played and did sessions on Peel's show and even reached number one on the 1996 Festive Fifty. Their track Come Out 2 Nite was Peel's Peelenium of 1996.  After Peel's death, Lauren Laverne, the singer, wrote an article on John Peel in The Independent in 2005:

"John Peel was a mentor to a lot of people, but he changed my life. I don't think he knew it but if it weren't for him I might have stayed in Sunderland.  He was just one of those people that you felt like you'd always known. He was exactly as you'd expect: this avuncular and slightly miserable, but cheerful bloke.  I used to listen to his show, and weirdly he picked up on the record Kenickie put out when I was 16. The show rang us up and asked us to come down and do a Peel Session. We didn't meet John that time but he called us the "Pride of Sunderland" and we got paid £500 which was the most money we'd ever seen. I suppose he paid me my first wage.  A few years later I started TV presenting and the first proper job I got was doing Glastonbury with John. It was the biggest deal and it meant so much. In one of the breaks he leant over and said: "You're made for this shit aren't you?". It was the biggest endorsement you could get, a nod from him. I was kind of ambivalent about presenting at the time but everything took off from there.  Now I do a radio show, I can appreciate what he did and his attitude to music. He was passionate and completely wrapped up in music but at the same time he wasn't po-faced. A lot of DJs are so pretentious about music but his radio show was incredibly inclusive and that was why everybody loved him. He drew you in really slowly but before you knew it, you were getting into weird Belgian techno.  It's great to know there are people you can look up to and think: "Yeah, that guy is fucking cool." John's one of those people.  I think if there was anyone who is important to the work I've done in my life, that person's him." [1]

All sessions are avalable on Kenickie's The John Peel Sessions (CD, Strange Fruit, 1999)

Retrieved from "https://peel.fandom.com/wiki/Kenickie?oldid=227563"
Community content is available under CC-BY-SA unless otherwise noted.