(This page covers Kevin Coyne as a solo artist and with the band Siren, also known as Coyne-Clague and Clague) 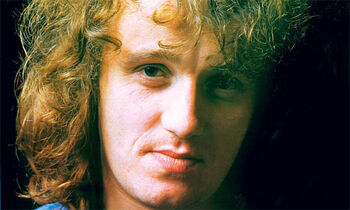 Coyne is notable for his unorthodox style of blues-influenced guitar composition, the intense quality of his vocal delivery, and his bold treatment of injustice to the mentally ill in his lyrics. Many influential music figures have described themselves as Coyne fans, among them Sting and John Lydon. In the mid-1970s, prior to the formation of The Police, Coyne's band included guitarist Andy Summers. Prominent BBC disc jockey and world music authority Andy Kershaw has described Coyne as "a national treasure who keeps getting better" and as one of the great British blues voices.

Over many years Coyne produced the distinctive art work for many of his own album covers, but his move to Germany in the 1980s saw his work on full size paintings blossom in its own right. (Read more at Wikipedia.)

Kevin Coyne was one of the artists associated with Peel's Dandelion label who remained favourites of the DJ long after the label's demise. Peel signed him to Dandelion, together with bassist Dave Clague, as a duo called Coyne-Clague. According to Peel on Dutch TV programme, Lola Da Musica, he received a demo without any return address or phone number and was so desperate to contact them that he pasted 'wanted' notices on lamp-posts asking anyone who knew them to get in touch.

The duo soon became a full band, Siren, who recorded two albums for Dandelion, Siren (1969) and Strange Locomotion (1971). After Siren broke up, Coyne recorded his first solo LP, Case History (1972), also for Dandelion, and this made enough of an impression for him to be signed by Virgin, for whom he recorded ten albums between 1973 and 1980. He later recorded for Cherry Red Records, moved to Germany in 1985 and continued to record and perform there.

His first appearance on Peel's shows was on a Coyne-Clague session, which went out on the final "son of Night Ride" programme of 24 September 1969. Ten solo sessions followed, the first nine between 1973 and 1982, and the final one in 1990, and although Peel played his material less frequently during the 1980s and 1990s, it did not disappear completely from his playlists. In 2004 Peel played tracks from Coyne's then current album, Donut City - although the singer's final BBC session, shortly before his death in December 2004, was for Andy Kershaw, who also rated him highly (see above). This was broadcast on November 7 2004 and included a tribute to Peel.

In 2005, 'The Stride', released originally under the name Clague, was among the favourite 45s found in John Peel's Record Box.

Retrieved from "https://peel.fandom.com/wiki/Kevin_Coyne?oldid=252393"
Community content is available under CC-BY-SA unless otherwise noted.