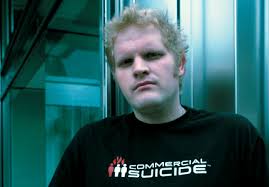 Klute is the primary recording alias of Tom Withers, a drum and bass Producer and DJ from London, UK.  He is also the drummer, vocalist and songwriter in the English Hardcore punk band The Stupids and first turned to electronic production in the early 1990s, experimenting with techno before turning to Drum and Bass. He released two 12" singles under the Override alias in 1995-96, as well as appearing on Ninja Tune compilations. In 1997 he released the 12" single Deep Control under the Alias of The Spectre. In 1998 the debut Klute LP Casual Bodies was released on the seminal Certificate 18 imprint; Fear of People followed in 2000.  In 2001 he established the label Commercial Suicide. This released his own material, including the albums Lie, Cheat & Steal (2003), No One's Listening Anymore (2005) The Emperor's New Clothes (2007) and most recently Music For Prophet (2010). All of these albums are double CDs with one drum and bass CD and another of downtempo techno and breakbeat. In 2008 Klute got involved with the reformed Stupids who were supposed to do a one off live show in London. Realising the chemistry they still had as a live band, they went on to extend the live performances and even release a 7" Feel The Suck with 3 new songs. Four of their early releases were also re-issued by Boss Tuneage on limited coloured vinyl.

Peel was a fan of Klute's former band The Stupids, who did three sessions for his show in the late 80's. After Klute left the band, and started his solo career, Peel took interest in Klute's new musical direction and enjoyed his music. Klute also did remixes for other artists including Bis and Mogwai. The track "Time 4 Change" from No One's Listening Anymore album was the last tune played on air by John Peel on 14 October 2004 before he died of a heart attack while on a working holiday in Peru. After Peel's death in an interview in 2011 to celebrate ten years of the Commercial Suicide record label, Klute paid tribute to Peel when asked a question relating to him:

"I miss John Peel's presence immensely, there's no one that can replace him, he was one of a kind. I think there's a lot of people who feel they do a good job but I think everyone completely misses his point. He didn't give a fuck about anything but presenting music he thought was for real. He had no particular personal agenda. He came from the old school, was very selfless and genuine." [1]

Retrieved from "https://peel.fandom.com/wiki/Klute?oldid=230178"
Community content is available under CC-BY-SA unless otherwise noted.