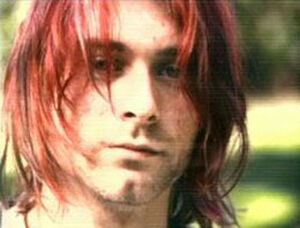 Kurt Donald Cobain (February 20, 1967 – c. April 5, 1994) was an American musician and artist. He was best known as the lead singer, guitarist, and primary songwriter of the alternative rock band Nirvana. Cobain formed Nirvana with Krist Novoselic in Aberdeen, Washington, in 1985 and established it as part of the Seattle music scene, having its debut album Bleach released on the independent record label Sub Pop in 1989. After signing with major label DGC Records, the band found breakthrough success with "Smells Like Teen Spirit" from its second album Nevermind (1991). Following the success of Nevermind, Kurt collaborated with his favourite author William S. Burroughs for the The "Priest" They Called Him single and played bass for the Closing Time track, which was written jointly with wife Courtney Love and Patty Scheme of Hole. The track was never released commercially and later on was found on a bootleg series Outcesticide. Nirvana's final studio album In Utero (1993) did not match the sales figures of Nevermind but was still a critical and commercial success. During the last years of his life, Cobain struggled with heroin addiction, illness and depression. He also had difficulty coping with his fame and public image, and the professional and lifelong personal pressures surrounding himself and his wife, musician Courtney Love. On April 8, 1994, Cobain was found dead at his home in Seattle, the victim of what was officially ruled a suicide by a self-inflicted shotgun wound to the head. The circumstances of his death at age 27 have become a topic of public fascination and debate. Since their debut, Nirvana, with Cobain as a songwriter, has sold over 25 million albums in the US, and over 75 million worldwide.

As a fan of Nirvana, Peel was saddened by Kurt's death and on his 08 April 1994 show mentioned that he was concerned that people would mythologise Kurt's death and forget that he left behind a wife and a child. As a tribute, Peel played all of Nirvana's sessions back to back on 22 April 1994. In August 1994, Courtney Love forwarded a copy of the studio version of "Closing Time", which was a collaboration with Kurt Cobain and fellow Hole member, Patty Scheme, to John on cassette tape: this was broadcast on 26 August 1994. It is assumed that the radio broadcast version was recorded and then distributed to various bootleggers, leading to the song's inclusion on the Nirvana bootleg series Outcesticide. However, Blue Moon Records, the label on which the bootleg series was released, claimed that the recording was sourced from Love's own tape.

Retrieved from "https://peel.fandom.com/wiki/Kurt_Cobain?oldid=172318"
Community content is available under CC-BY-SA unless otherwise noted.