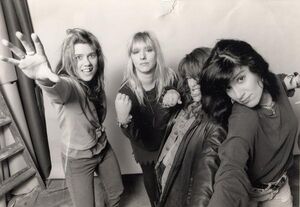 L7 were an American all female alternative rock band from Los Angeles. They were active from 1985 to 2001. Due to their sound and image, they are often associated with the grunge movement. L7 were part of the many riot grrrl bands of the late 80's and early 90's. The group were formed by Donita Sparks and Suzi Gardner in 1985. The band's name derives from a 1950s slang phrase meaning "square".  In 1991, the band formed Rock for Choice, a Pro-Choice women's rights group that was supported by other prominent bands of that era including Pearl Jam, Red Hot Chili Peppers, Nirvana, and Rage Against the Machine. Their third album Bricks Are Heavy, released in 1992 and produced by Butch Vig, was their most successful release: it featured their single Pretend We're Dead which gained substantial airplay on MTV and American rock radio stations. L7's fourth album, Hungry for Stink, was released in July 1994 and coincided with the Lollapalooza tour, on which they shared the stage with other successful acts of the era including The Smashing Pumpkins and the Breeders. The band's most recent album, Slap-Happy, was released in 1999 and did not chart on either side of the Atlantic. By 2001 L7 were no longer touring or producing records.

Peel was a fan of riot grrrl acts such as Babes in Toyland and Hole. L7 were part of that scene and did a session for Peel's show in 1990. The band's third album, Bricks Are Heavy, released in 1992 and produced by Butch Vig, departed from their riot grrrl roots and became more grungy and hard rock, which Peel was not really keen on. On his show from 04 September 1992 he disliked the band's new music after seeing them at the Reading festival:

"...L7 came next, and again they're one of those...I wasn't much impressed by them. They seemed to be demonstrating, as much as anything else, that girls can be as daft as boys"

The list below was compiled only from the database of this site and Lorcan's Tracklistings Archive and may be incomplete. Please add further details if known.

Retrieved from "https://peel.fandom.com/wiki/L7?oldid=244964"
Community content is available under CC-BY-SA unless otherwise noted.