(This page refers to the American comic duo: for the UK reggae duo, see Laurel And Hardy (2)) 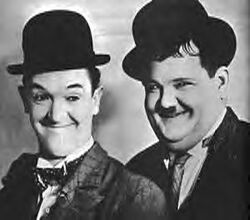 Stan Laurel (1890-1965) was born Arthur Stanley Jefferson in Ulverston, Lancashire. His family moved to Glasgow when he was 15 and he began his career working for theatrical impresario Fred Karno. The Karno troupe toured America in 1912 and Stan went with them. He began making films in 1925 and was eventually teamed with Southerner Oliver Hardy (1892-1957), born Norvell Hardy in Harlem, Georgia. Their double act featured in 107 films, both silent and sound, and they became famous the world over. Their Spanish names, 'El Gordo Y El Flacco' ('The Fat One And The Thin One'), define their trademark appearances: the rotund, polite yet tempestuous Ollie complemented by the nervous, confused yet sweetly endearing Stan. Their catchphrase "Here's another nice mess you've gotten me into!" (spoken by Ollie in several variants) is still in common usage today, and their films, almost all of which are extant, display hilarious slapstick, smart one-liners and even on occasion song and dance routines.

One of the most successful, Way Out West, included a song based around the popular tune On The Trail Of The Lonesome Pine and backed by Chill Wills & the Avalon Boys, which became a surprise Christmas hit at the end of 1975 following a single release on United Artists, due in no small part to its repeated plays by Peel ("A record which I'm very disappointed to see is still nobody's record of the week, but it could easily be ours." [1]). It reached number 2 in the UK charts, and John placed it at 14 in his top fifteen of the year on 19 December 1975. The song was also covered by Viv Stanshall in a Peel session of October 1975.

Retrieved from "https://peel.fandom.com/wiki/Laurel_And_Hardy?oldid=144926"
Community content is available under CC-BY-SA unless otherwise noted.