This page refers to the UK reggae duo. For the American comedy duo, see Laurel And Hardy 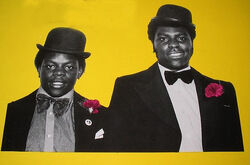 Laurel (aka Paul Dawkins) and Hardy (Anthony Robinson) were both born in London in 1962. They began performing in a soul style, but soon evolved an easy-going reggae style with vaguely satirical lyrics usually based around police harassment. This was evinced in their debut 10 inch release on Fashion, You're Nicked, which JP quickly picked up on and which led to their one and only session (chosen during the 1983 Festive Fifty as one of the most outstanding of the year). They consciously referenced the American comedians, appearing in bowler hats, bow ties, white gloves and suits. They signed to a major label, CBS, and toured universities using a full band as opposed to backing tapes, initially supporting Pigbag and subsequently themselves supported by dub poet Benjamin Zephaniah. However, despite John airing tracks from their only LP in late 1983, Clunk Click failed to chart, and further low-selling releases prompted their return to obscurity.

Retrieved from "https://peel.fandom.com/wiki/Laurel_And_Hardy_(2)?oldid=177559"
Community content is available under CC-BY-SA unless otherwise noted.