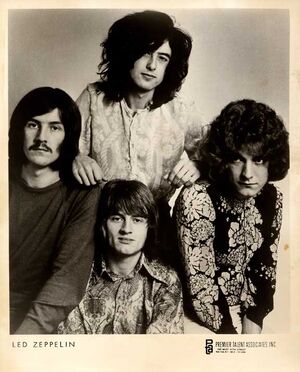 Led Zeppelin were an English rock band formed in London in 1968. The band consisted of guitarist Jimmy Page, singer Robert Plant, bassist and keyboardist John Paul Jones, and drummer John Bonham. The group's heavy, guitar-driven sound, rooted in blues on their early albums, has drawn them recognition as one of the progenitors of heavy metal, though their unique style drew from a wide variety of influences, including folk music. After the disbandment of the Yardbirds, some of the members formed Led Zeppelin who signed a deal with Atlantic Records that afforded them considerable artistic freedom. Although the group was initially unpopular with critics, they achieved significant commercial success with albums such as Led Zeppelin (1969), Led Zeppelin II (1969), Led Zeppelin III (1970), their untitled fourth album (1971), Houses of the Holy (1973), and Physical Graffiti (1975). Their fourth album, which features the track "Stairway to Heaven", is among the most popular and influential works in rock music, and it helped to cement the popularity of the group.

Peel, who had enthused over the Yardbirds' records during his time in the USA, naturally took an interest in the groups formed by ex-members of the band - firstly, the Jeff Beck Group, then Led Zeppelin. He was a big supporter of the group through the late 60s and 70s, although he played this down in later years:

"A lot of people say - which you haven't done, for which I'm grateful - 'You've been kind of instrumental in the career of…' They always mention Led Zeppelin for some reason, but I don't think of it in those terms. I don't do what I do either to win praise or fame for myself, but because I like doing it." [1]

JP was eager to get the band in for a session (as referred to on 16 February 1969, while also noting that they had already made a start on cracking the American market). In 1969, guitarist Jimmy Page mentioned that the way the BBC was programming Radio One left little room for any unconventional acts: [2]

"The BBC have effectively killed the progress of 'underground' music."

But in virtually the same breath, he did praise two particular DJs by name:

"It's only John Peel and that other guy, Pete Drummond, who can play any of the good stuff."

As well as their early studio sessions for Top Gear, Led Zeppelin played (with Liverpool Scene) in a one-hour segment recorded live at the BBC Playhouse Theatre on 1969-06-27 as a pilot for the BBC's long-running In Concert show. [3] Introducing the band on that programme from the Paris Theatre in 1971, Peel commented:

"This is something we've waited for a long time on the show and I know it's going to be great."

The early 1970s saw Led Zeppelin gaining more radio exposure, with Radio One expanding its coverage of "progressive" music (no longer "underground" but selling well to LP buyers) in its Sounds Of The Seventies evening programme strand, which included Peel's shows. After this was ended by the BBC's enforced economy drive, Peel still recognized the central importance of the band to Top Gear by including an early session in the final programme of the show, on 25 September 1975. The following year, 'Stairway to Heaven' was #1 in the first-ever Festive Fifty.

As punk started to become popular in the late 70s, many prog and hard rock acts were slowly driven out of Peel's playlist, including Led Zeppelin themselves. When the Peelenium was broadcast in 1999, no Led Zeppelin songs featured at all. In the all-time 2000 Festive Fifty, listeners found no place for former chart-topper Stairway To Heaven, although tracks by other major artists of the 60s and 70s did appear. Despite this, Robert Plant, the singer, attended John Peel's funeral in 2004 [4] and recognised that his group may not have been successful without Peel's show Top Gear plugging their records. In 2005, Robert Plant along with Roger Daltrey and other musicians recorded a tribute single to John Peel covering the Buzzcocks' Ever Fallen In Love.[5]

Released officially as part of BBC Sessions (1997, Atlantic), along with other BBC sessions and In Concert appearance hosted by Peel. In 2016, an expanded 3xCD version was released, The Complete BBC Sessions.

Retrieved from "https://peel.fandom.com/wiki/Led_Zeppelin?oldid=251511"
Community content is available under CC-BY-SA unless otherwise noted.