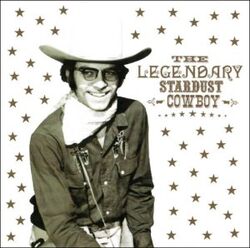 The Legendary Stardust Cowboy, born Norman Carl Odam (1947- ) and known as 'the Ledge' to his fans (which include David Bowie), is an 'outsider' musician who taught himself to play the guitar and bugle. He is instantly recognisable owing to his Wild West costume and the fact that he considers himself a serious artist (hence the 'Legendary' epithet). He is best known for the 1968 song Paralyzed, which saw a limited release in his native town of lubbock, Texas. With T-Bone Burnett on drums, Odam dedicates the song to a bugle company and proceeds to shout, whoop, and snarl his way through mostly unintelligible lyrics. It has been cited as an influence on psychobilly and led to Odam appearing on Rowan & Martin's Laugh-In, although that appearance led to him walking off because he felt the cast were not taking his music seriously. A musicians' strike that halted production on live TV performances effectively ended the Ledge's career as it was starting, although he continues to tour and perform to this day. Bowie covered I Took A Trip On A Gemini Spaceship on the LP Heathen, and Odam is still lionized by celebrities as diverse as Adam Ant and the Duchess Of York. He now plays with a backing band called the Altamont Boys, which includes Klaus Fluoride (Dead Kennedys).

In March 2015, Paralyzed received an unexpected recommendation from the classical music world. The concert pianist Paul Lewis told BBC Music magazine that "when life gets too much" he listens to the track, adding, "It's just the most chaotic, anarchic three minutes of noise - more a means of stress release than a musical experience. It's wonderful, though, and I'd highly recommend it".

Paralyzed regularly turns up on lists of the worst records ever made (Kenny Everett's 'bottom 30', for example) and even made Peel's inaugural Festive Fifty, with JP averring it as proof of the chart's ability to be unpredictable. Although it started life at the top of the chart, by the time of broadcast it had slipped to number 15: as John maintained, "I was rather disappointed to see it sink down to that position, although it didn't sink very far. Glad that it got in there at all, really."

JP continued to play the Ledge's material infrequently over the years and particularly agreed with the title of one of his harangues, I Hate CDs.

Retrieved from "https://peel.fandom.com/wiki/Legendary_Stardust_Cowboy?oldid=223567"
Community content is available under CC-BY-SA unless otherwise noted.