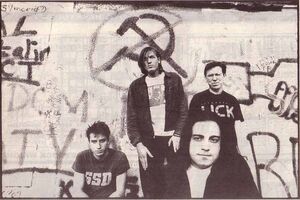 The Lemonheads are an alternative rock band formed in Boston (USA) in 1986 by Evan Dando, Ben Deily and Jesse Peretz. Dando has remained the band's only constant member. After their initial punk-influenced releases and tours as an independent/"college rock" band in the late '80s, with some cover songs from the Monkees and Suzanne Vega, the Lemonheads' popularity with a mass audience grew in 1992 with the major label album It's a Shame about Ray, which was produced, engineered, and mixed by The Robb Brothers (Bruce Robb, Dee, and Joe). This was followed by a cover of Simon and Garfunkel's "Mrs. Robinson", which eventually became one of the band's most successful singles. The Lemonheads were active until 1997 before going on hiatus, but reformed with a new lineup in 2005 and released The Lemonheads the following year. The band released its latest album, Varshons, in June 2009.

Peel gave airtime to tracks from the band's first LP and continued playing their material until they became successful in 1992 with It's A Shame About Ray. He claimed that their version of Suzanne Vega's Luka was "infinitely preferable to the original one" [1]. They were invited for a session in 1989, where on one track called The Door, the singer Evan Dando decided to allow his fellow guitarist Terry Corey Brennan take over vocals. So impressed was he with the guitar playing on that song that Peel said "that's the closest we've come to guitar hero stuff in quite a season".

Retrieved from "https://peel.fandom.com/wiki/Lemonheads?oldid=231812"
Community content is available under CC-BY-SA unless otherwise noted.