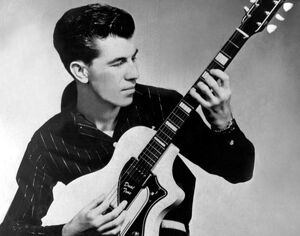 Link Wray (1929-2005) was an American rock'n'roll guitarist, songwriter and vocalist. Born in North Carolina, he was half Shawnee Indian and referred to his upbringing frequently in his songs and interviews. His achievements with and without his backing band, the Wraymen, are for the most part instrumental, since Wray had a lung removed pursuant to contracting tuberculosis during his service in the Korean War. In fact, his main claim to fame is Rumble (1958), which features a murderously heavy riff that allegedly inspired Jimmy Page, Neil Young, Iggy Pop and Pete Townshend, among many others. The title was allegedly supplied by Phil Everly, who said it sounded like a street fight. It has frequently been cited as an influence on punk and heavy metal, and his website claims it was the first song to intentionally use distortion in a rock'n'roll recording (although it is really a blues piece).

Wray recorded infrequently over the years, latterly in a studio self-made from a chicken shack. In the early 1970s, he was introduced to guitarist John Cipollina (Quicksilver Messenger Service) and formed a band featuring him as a special guest. Wray was married several times, had eight children and ended his life in Copenhagen. Peel obviously respected the man's pioneering spirit, while also noting that not all of his material was at such an exalted level. After succumbing to a BFBS listener's request to play Link's 1966 version of the Batman theme, John commented:

"There are times, you know, when I think Link Wray should have just recorded Rumble and then disappeared without a trace." [1]

The following year, in the course of a piece on his hero Duane Eddy, John used Wray as an example of an artist who should accept that his talent lay elsewhere than in the vocal field:

"In the 1970s Link, hitherto a guitar/bass/drums sort of chap, was encouraged to sing and eventually get into guitar heroics of the most morbid type. The recorded results were pretty beastly and I had Link marked down as one of those artists who do not themselves fully understand what it is they do that is so good. But in 1989 someone from Ace Records persuaded Link Wray into Pathway Studios, London, to record tracks for an LP himself and left the vocal mike locked in the cupboard for all but two of the ten tracks. The result should bring a healthy glow to the cheeks of anyone interested in the survival of the rock 'n' roll instrumental. 'Apache' is by no means flawless - but who wants flawless? 'Flawless' means Eric Clapton." [1]

Nonetheless, he played Wray's material with reasonable frequency and praised Ace Of Spades (no relation) for its perfect simplicity. [2] Peel saw him with Robert Gordon at Pinkpop in 1978, Rumble headed the Peelenium 1958 choices and Kat's Karavan attempted to record the man for a session, but allegedly could not find a studio in time. [3]

Retrieved from "https://peel.fandom.com/wiki/Link_Wray?oldid=228375"
Community content is available under CC-BY-SA unless otherwise noted.