"I used to listen to the American Forces Network in Europe from Stuttgart, and they would have I think just before the Grand Ole Opry they would have the American top 10, and that is where I first heard Little Richard. And hearing Little Richard for the first time, it really was, as I’ve said on countless previous occasions, it’s true – it was Saul on the road to Damascus. I mean, it was an absolute revelation, because I’d never heard anything so wild and untamed and just sort of potentially threatening. And I thought, “This is what I want,” you know. “I’ve found what it is that I’m after.” (Peeling Back The Years 1 (Transcript)

Born Richard Wayne Penniman, Little Richard (December 5th 1932 - May 9th 2020) was one of the pivotal arists in the history of rock'n'roll. Despite the fact that he had been performing since the mid-40s, his greatest success came in the period 1955-7, 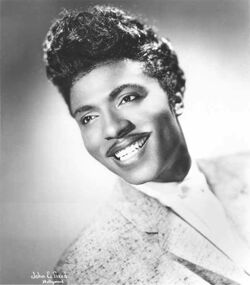 when he used a blues holler, staccato piano playing, an underlying funk feeling to the rock'n'roll beat, and a songwriting style that emphasised the equation between sex and money that had always existed in the blues, to make a series of tracks for the Specialty label that are still electrifying to listen to today: Ready Teddy, Long Tall Sally (later covered by the Beatles), Shake A Hand (to be covered many years after the fact by Paul McCartney), Good Golly Miss Molly, Rip It Up, Tutti Frutti and Keep A-Knocking are merely a few of these.

While numerous other R&B greats of the early '50s had been moving in a similar direction, none of them matched the sheer electricity of Richard's vocals. With his bullet-speed deliveries, ecstatic trills, and the overjoyed force of personality in his singing, he was crucial in upping the voltage from high-powered R&B into the similar, yet different, guise of rock & roll. [1]

At the height of his popularity in 1957, Richard renounced rock'n'roll by throwing an $8,000 ring from the Sydney Harbour Bridge, and spent the next few years recording solely gospel music. He also married in 1959, but both this and his ministry seemed to be difficult to hold together, and he was back performing in 1962, appearing with the Beatles at the Star Club in Hamburg and then having them as a supporting act on a tour of Great Britain, since his records were still selling well there. In fact he registered a top 20 hit in 1964 with Bama Lama Bama Loo, at a time when the rock'n'roll boom was well past.

In 1965, his path crossed that of the young Jimi Hendrix, who was a member of his band and played on some of the recordings that Richard was now once more making for Specialty. The rock'n'roll revival of the late 60s gave him an opportunity for a comeback and an appearance at the Toronto Rock'N'Roll Festival. He would record a number of albums around this time that were notable for their ecelcticism and power, despite the fact that at this time he had returned to living a somewhat dissolute lifestyle. At the time, he was invited (and refused) to play all-black concerts, but would not exclude any race from his performances. He re-recorded his hits several times, but the Specialty versions retain an electricity and vitality lacking from these.

Richard's influence extended over many artists and genres. James Brown cited him as his idol, Creedence Clearwater Revival's John Fogerty clearly modelled his vocal style on Richard's (to the extent that Travellin' Band sounds remarkably like an updated version of Long Tall Sally), and Otis Redding plundered his energetic stage act and some vocal mannerisms, moulding them into a soul style (a type of music which Richard arguably created).

John was so affected by his first hearing of Richard's music that in later years he would compare any earth-shattering discovery with this musical defloration (e.g. the Ramones, Sophie & Peter Johnston). He described him, in tandem with Gene Vincent, Chuck Berry and Jerry Lee Lewis, as "feral creatures and rather frightening, even on record. You thought, I'm glad they live on the other side of the Atlantic." (02 November 1999)

In March 1992, Peel became convinced he had a Little Richard cover version somewhere in his collection, and attempted to find it via an exhaustive search of his 7 inch singles. He played ones that he had forgotten about, or was unaware he had, during the course of the search, the end of which was announced on 26 March 1993. The record in question was Mickey Lee Lane's version of Tutti Frutti.

Retrieved from "https://peel.fandom.com/wiki/Little_Richard?oldid=250682"
Community content is available under CC-BY-SA unless otherwise noted.