(This article is about the football club supported by John Peel. For the English city of the same name, see Liverpool (city).) 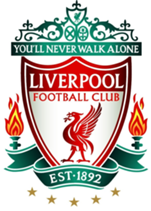 Liverpool Football Club are a Premier League football club based in Liverpool. The club have won more European trophies than any other English team with six European Cups, three UEFA Cups and four UEFA Super Cups, as well as one FIFA Club World Cup. They have also won nineteen League titles, seven FA Cups and a record eight League Cups.

Liverpool were founded in 1892 and joined the Football League the following year. They have played at Anfield since their formation. The most successful period in Liverpool's history was the 1970s and '80s when Bill Shankly and Bob Paisley led the club to eleven league titles and seven European trophies.

The club's supporters have been involved in two major tragedies. The first was the Heysel Stadium disaster in 1985, during which charging Liverpool fans caused a crush that resulted in a wall collapsing and the death of 39 Juventus supporters, after which English clubs were banned from European competition for five years. In the 1989 Hillsborough disaster, 96 Liverpool supporters lost their lives in a crush against perimeter fencing. (Read more at Wikipedia.)

"My affection for Liverpool – if you’re a real supporter it extends beyond the players and the ground to the city itself, and I was always very, very proud of being associated, in my own mind at least, with Liverpool...

When I first met Sheila she was a Leeds United supporter, and Leeds at that time were actually the only team that actually posed any kind of threat to Liverpool’s domination. So there was quite clearly a bit of potential here for disaster. Sheila realized what she was up against when I went and sat in the middle of Regent’s Park when Liverpool lost and just cried and cried and cried – for about an hour, you know. And she suddenly thought obviously, “Here’s a greater force at work here than I first recognized.”

"If somebody had come to me and said, when I was about fifteen, 'look, you can play for Liverpool but you've got to die when you're thirty' I would have said, 'fine! I'll take that, no trouble at all'." (04 August 1981)

(JP: 'Best football record in the history of the world ever? Very possibly: certainly the best since the last one that John Barnes made, anyway....Don't be surprised if you hear that again at some stage on these programmes.')