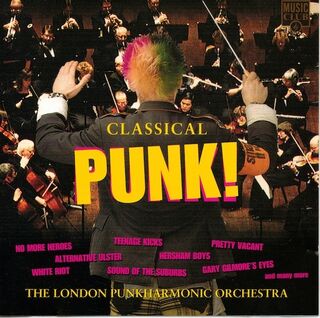 The London Punkharmonic Orchestra are what appears to have been a one-off musical collective. Little or no information is available on them (although AllMusic insinuate that it is a pseudonym of the London Philharmonic)[1], and their only available recording is Classical Punk, a CD originally released on the budget label Music Club in 1995. It comprises orchestral transcriptions of punk classics, cleverly done so that the melody of the original song is not always immediately apparent. Peel picked up on it at once, and played it regularly throughout early summer 1995. As can be seen below, he thought it was "excellent", generally following each track with a play of the original version and rebuffed derision from reviewers who felt it did not pay respect to the music "which surely was what punk was all about in the first place". However, AllMusic avers that it is "a concept that works marvellously, as the London Philharmonic negotiates their way through the angst and comes up with a batch of unlikely tunes holding a whole lot more melody and music in them than one would originally believe.....(the tracks) bristle with a depth one wouldn't think possible, making for a classical approach that's visceral as well. A quirky idea for an album to be sure, but again, one that works on every level, a sort of gabba-gabba-hey with strings and oboes." [2]

A year later, Peel briefly revisited the CD, delighted that it had not been lost in the mountain of music at Peel Acres: it was reissued in 1998 under the title Symphony Of Destruction: Punk Goes Classical. The orchestra's version of Teenage Kicks is featured at the opening of The Story Of The Undertones: Teenage Kicks.

All selections were played from the CD 'Classical Punk!' (Music Club)

Retrieved from "https://peel.fandom.com/wiki/London_Punkharmonic_Orchestra?oldid=250375"
Community content is available under CC-BY-SA unless otherwise noted.