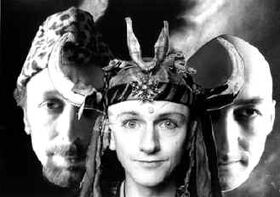 Loop Guru is a worldbeat group consisting of bassist/guitarist Salman Gita (born Sam Dodson) and programmer Jamuud (born David Muddyman). They first met around 1980, initially played together in the Transmitters and released their debut single as Loop Guru, The Shrine, in 1992. The band's music is a melange of Asian and Western music, infusing Western dance beats with the rich textures and sounds of Indonesian gamelan and traditional Indian music. Heavy emphasis is placed on electronic samples of traditional instruments, voices, and miscellaneous sounds.

Loop Guru's main exuberant oeuvre of lively rhythms and effusive sounds is occasionally punctuated by more contemplative albums (e.g. The Third Chamber) that are reminiscent of and influenced by ambient music and are similar to musical artists such as Brian Eno and Jon Hassell... (Read more). AllMusic claim they "deftly combined old-world music and sound with new-world attitude and technology." The band function as a musical collective, rarely playing two gigs with the same lineup.

The Transmitters recorded two Peel sessions, and some 14 years later guitarist Dodson found himself being played by JP again: spins of their early releases led to the first session, which, given the band's predilection for unusual titles for their songs, unsurprisingly featured esoteric instrumental roles (Speechless on 'hypnorthymic therapy', Zahrema on 'zahremics', and Mad Jym on 'quantum metallics'). Kindred spirits Zion Train worked on remixes for them.

The band played at the Phoenix Festival in 1993, and John recalled spending an hour in a tent with them, describing it as the perfect antidote to the horrors of the main stage. [1] Despite John's consistent support, however, the group do not seem to have captured the attention of his audience in the same way: they failed to gain a single Festive Fifty entry, and their last session in 1997 also spelled the end of airplay for them on Kat's Karavan.

Retrieved from "https://peel.fandom.com/wiki/Loop_Guru?oldid=168270"
Community content is available under CC-BY-SA unless otherwise noted.