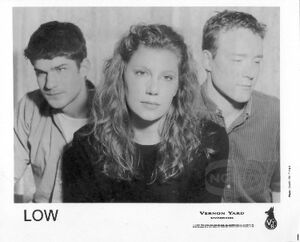 Low is an American indie rock group from Duluth, Minnesota, formed in 1993. As of now, the group is composed of founding members Alan Sparhawk (guitar and vocals) and Mimi Parker (drums and vocals), joined by newer addition Steve Garrington (bass guitar).  The music of Low is characterized by slow tempos and minimalist arrangements. Early descriptions sometimes referred to it as rock subgenre called "slowcore". However, Low's members ultimately disapproved of the term. Parker and Sparhawk's striking vocal harmonies represent perhaps the group's most distinctive element; critic Denise Sullivan writes that their shared vocals are "as chilling as anything Gram and Emmylou ever conspired on—though that's not to say it's country-tinged, just straight from the heart."

Peel discovered the band through Sub Pop, the label that Nirvana were originally signed to. The band have done four sessions for Peel, two of them live at Maida Vale. In 2007, Sparhawk referenced John's effect on their career:

"Our Christmas record was significant. John Peel flipped out and played it on daytime BBC and that was a huge thing for us." [1]

4. Live from Peel Acres 30 January 2003. (From 'The Peel Sessions' (Ken Garner): Peel was snowbound in London at R1, the band playing in from Peel Acres. 'They were so disappointed he wasn’t there,' remembers Sheila.)

(The list below was compiled from the database of this site and Lorcan's Tracklistings Archive. Please add more information if known.)