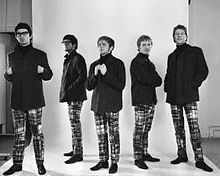 Manfred Mann were an English rock band of the 1960s, named after South African-born keyboardist, Manfred Mann. The group had two different lead vocalists during their success, Paul Jones from 1962 to 1966, and Mike d'Abo from 1966 to 1969.. Manfred Mann were regularly in the charts in the 1960s. Three of the band's most successful singles, "Do Wah Diddy Diddy", "Pretty Flamingo" and "Mighty Quinn", topped the UK Singles Chart. With the success of "Do Wah Diddy Diddy" the sound of the group's singles moved away from the jazzy, blues-based music of their early years to a pop hybrid that continued to make hit singles from cover material.

Mann and Hugg were already writing advertising jingles at the time of the group's demise but continued to work together in a group format with Manfred Mann Chapter Three, an experimental jazz rock band described by Mann as an over-reaction to the hit factory of the Manfred Mann group. Mann then formed a new group. In its very earliest stages, the band was simply billed as "Manfred Mann" and thus a continuation of the 1960s group. Their second single, Randy Newman's "Living Without You," was also released by "Manfred Mann" in Europe, but by "Manfred Mann's Earth Band" in the USA, where the track became a minor chart hit. From 1972 forward Manfred Mann's Earth Band was the band name used on all releases by this group, and they are considered a separate band from Manfred Mann. (Read more at Wikipedia.)

Manfred Mann had their most successful period in the mid-1960s, when Peel was living in the USA and working as a DJ under the name John Raven(s)croft. Some of their UK hit singles also made the US charts, and three of them, “Just Like A Woman”, “Pretty Flamingo” and “Semi-Detached Suburban Mr. James”, appeared in the British Top Ten listings compiled by Peel during his stint at KMEN in 1966. All three tracks remained in Peel’s chart for several weeks, with the latter two titles both reaching Number One, in May and December respectively.

Yet when Peel returned to Britain, he didn’t play much material by Manfred Mann. By 1967 their run of hit singles was slowing down. They were thought of as a commercial pop group, despite the more adventurous side they showed on their LPs and their successful covers of Bob Dylan songs, which were praised by Dylan himself. Because of this, they were not among the first groups invited to do a session for Top Gear, although Peel played their version of Bob Dylan’s “Mighty Quinn” on the show when it was a new release and they did two Top Gear sessions in 1968 before breaking up in 1969.

Reviewing their single "Ragamuffin Man" in Melody Maker's Blind Date feature in April 1969, he was critical of the record and of the group: "... We had them on Top Gear recently and we were hoping they would take the opportunity to do some things they couldn't do elsewhere, but they didn't. They just played some LP tracks which was a bit of a disappointment...This is a "must-get-into-the-top-twenty" record with no identity..."[1]

Manfred Mann's Chapter Three, whose LPs were issued on Philips' "progressive" label Vertigo, seemed much more suited to the style of Peel's programmes of the early 1970s, and they were booked to do sessions for Top Gear, as was the more commercially successful Manfred Mann's Earth Band. Peel may have had some respect for Manfred Mann himself, because when in 1974 the Melody Maker ran a feature asking musicians how they intended to vote in the forthcoming general election, Mann was one of the few rock stars to express support for the Labour Party. He also opposed apartheid in his native South Africa and even had a short career as a radio presenter, hosting a series of half-hour programmes of rock records in stereo on Radio 3 in late 1971.[2]

Peel seldom revisited Manfred Mann's material and paid no attention to the band's later incarnations (the Blues Band and the Manfreds), but Tom McGuinness's McGuinness Flint, a popular live band of the early 1970s, did sessions for Top Gear. Bassist Jack Bruce spent some months with the band before finding greater fame with Cream and as a solo artist. Former Manfred Mann lead singer Paul Jones later became a respected Radio Two broadcaster and host of the station's long-running blues show, yet despite Peel's love of the blues he is not known to have recommended Jones's show on air, or to have appeared on it as a studio guest. However he did contribute to Pepper Forever!, a 1997 Radio Two documentary narrated by Jones on the thirtieth anniversary of the Beatles' Sergeant Pepper's Lonely Hearts Club Band LP.

Seven sessions in total under three names, as indicated below.

Other BBC session material by Manfred Mann was released as BBC Sessions, (CD, 1998, BBC Music) and in the Radio Days series (CD/LP, 2019).

Retrieved from "https://peel.fandom.com/wiki/Manfred_Mann?oldid=229512"
Community content is available under CC-BY-SA unless otherwise noted.