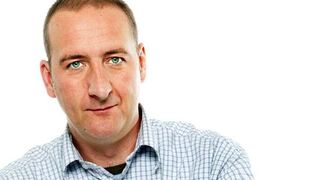 Marc Riley (born in Manchester, Lancashire, England, 10 July 1961) is a British musician, alternative rock critic and radio DJ on BBC Radio 6 Music. Formerly a member of the Fall, he had his own record label, In-Tape, and also formed Marc Riley And The Creepers (also known as Marc Riley With The Creepers and later on simply called The Creepers). The Creepers were: Marc Riley (Guitar/Vocals), Eddie Fenn (Drums), Paul Fletcher (Guitar), Pete Keogh (Bass) Paul Fletcher and Pete Keogh were later replaced by Mark Tilton on Guitar and Phil Roberts on Bass. The records they made were full of hard hitting humour and remained as opinionated as those of Riley`s former Boss Mark E. Smith (who apparently wrote the sarcastic Middle Class about Riley). Riley also contributed to a flexidisc single for the Oink! comic under the name of The Oinkletts in 1986. Marc eventually split up The Creepers in 1987 after having got nearly no commercial success. Marc has worked in radio since about 1990 and for 14 years of that he worked with Mark Radcliffe on BBC Radio 5 and BBC Radio One, during which time he was known as Lard. He joined BBC Radio 6 Music in April 2004.

Peel got into the Creepers, when Marc Riley left one of Peel's favourite bands, The Fall, to create a new band called Marc Riley & The Creepers. The group did 5 sessions for Peel's show between 1983 and 1987. After the band split, Peel wondered what became of Marc Riley. On 01 December 1990, Peel thought Riley left music and did a job stripping houses. The duo would meet regularly when Riley joined BBC Radio One as part of Mark And Lard with Mark Radcliffe. Peel would sometimes present Mark And Lard's show when the duo were away. However after Peel's death, Marc Riley paid tribute on the 2005 Channel 4 documentary John Peel's Record Box. As part of the 10th anniversary of Peel's death in 2014 on BBC Six Radio, Riley commented that his greatest memory of Peel was when he covered Mark Ratcliffe's show on BBC Radio One during the 90's. He also mentioned that he had co-presented a show with Peel, but felt it wasn't a success [1].

First session was released on Marc Riley With The Creepers ‎– Creeping At Maida Vale (1984, In Tape, Vinyl)

Retrieved from "https://peel.fandom.com/wiki/Marc_Riley?oldid=240023"
Community content is available under CC-BY-SA unless otherwise noted.