"Is there any Manchester area notable more notable than Mark E. Smith? Not in my book, anyway." (25 November 1995 (BFBS)) 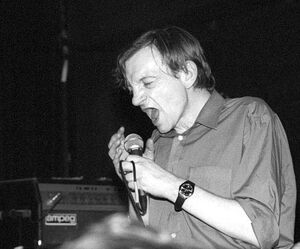 Mark Edward Smith (05 March 1957 - 24 January 2018) was the lead singer, lyricist, frontman, and only constant member of the English post-punk group The Fall. Alongside his work with the Fall, Smith had written a play called Hey, Luciani in 1986 and music for a Michael Clarke Dance Company ballet in 1988 called I Am Curious, Orange.  Apart from that, Smith had released two spoken-word solo albums, The Post-Nearly Man (1998) and Pander! Panda! Panzer! (2002).  Smith had also appeared as a guest vocalist for the likes of Edwyn Collins, Elastica, Gorillaz, Long Fin Killie, Mouse on Mars, Coldcut, Ghostigital and finally the Inspiral Carpets, with whom he collaborated on their 1994 UK Top 20 hit called I Want You.  Smith worked with Mouse on Mars on the collaboration project Von Südenfed, whose first album, Tromatic Reflexxions, was released on 21 May 2007. Smith also provided guest vocals on the Gorillaz album Plastic Beach, on the song "Glitter Freeze", and joined the group Shuttleworth to record the World Cup song England's Heartbeat.

As a fan of The Fall and Mark E Smith, Peel regularly played his music and collaborations. In addition, Smith appeared on This Is Your Life contributing a positive appraisal of Peel's effect on his career: Peel recalled, "Mark E. Smith appeared on film, looking very odd indeed. In a way, I was quite glad that he wasn't there in person, 'cos I think I should have been overwhelmed." (23 December 1995 (BFBS)). However, Smith was also critical of Peel when interviewed for Loaded magazine in 1997. Peel responded in a generous manner on his show on 27 November 1997 (BFBS):

"If you ever get to see the laddish magazine 'Loaded', there was an interview in a recent issue with Mark E. Smith out of the Fall, and in the course of it, already trying to pick a fight with the interviewer and stub a cigarette out in his face, and also bumped into members of Ash and claimed, most aggressively actually, that he'd started their career off. They did challenge him on this, but in the course of the interview, he also said something along the lines of, I was the worst DJ in the world, even worse than Tony Blackburn, which I thought was a bit hard, and one or two other things besides which I probably shouldn't say on this programme. But a hostile opinion of me, I have to say, but nevertheless, bearing in mind that he's not in perfect working order at the moment, and the band have given me intense pleasure over the years, I still love 'em madly."

When the Serbian radio station MTB seemed to assume that JP and Smith were friends, John replied, " I've only met him a couple of times, so he's hardly a friend. When I do see him I never know what to say to him anyway, so we just punch each other on the shoulder in a manly way and go our separate ways." [1]

After Peel's death, Smith was invited on BBC's Newsnight to talk about the death of Peel, where he complimented JP and John Walters. However, critics did question his behaviour, especially the unusual facial expressions he made on the programme. [2]

Retrieved from "https://peel.fandom.com/wiki/Mark_E._Smith?oldid=231093"
Community content is available under CC-BY-SA unless otherwise noted.