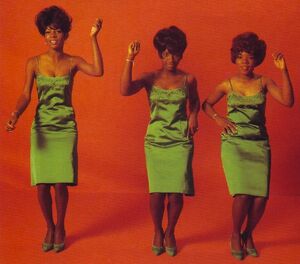 Martha & The Vandellas were an American music group. They were one of the most successful groups in the Motown roster during the 1960's performing primarily soul, but also pop and rock'n'roll. In 1967 the group's name was officially changed from Martha & The Vandellas to Martha Reeves & The Vandellas, to conform with the company's recent changes of The Supremes and The Miracles's names to reflect their featured lead singers. The group's string of hits included "(Love Is Like a) Heat Wave", "Nowhere to Run", "Jimmy Mack", "Bless You" and "Dancing in the Street", the latter song becoming their signature single. During their nine-year run on the charts from 1963 to 1972, Martha and the Vandellas charted over twenty-six hits and recorded in the styles of doo-wop, R&B, pop, blues, rock and roll and soul. Ten Vandellas songs reached the top ten of the Billboard R&B singles chart, including two R&B number ones.

Martha and the Vandellas had a succession of chart hits during the period when Peel was living in the USA, and they featured in the playlists of Top 40 radio stations such as KMEN, where he worked. However, with the success of the Perfumed Garden on Radio London, Peel had distanced himself from Top 40 radio and conventional DJ presentation style.  Peel's first appearance on BBC Radio One was on Top Gear on 01 October 1967, where he co-presented the first episode of the show with Pete Drummond. The first song broadcast on the show was Love Bug Leave My Heart Alone by Martha and the Vandellas, which was also the last song played when Top Gear finished on 25 September 1975. In an interview with John Walters on Peeling Back The Years in 1987, Peel mentioned that the track was not chosen by him but by management, who wanted the show to look over "the horizons of pop" to attract extra listeners.[1]

Although Peel was a fan of 60's/70's soul music, he rarely played any of Martha & The Vandellas tracks in later years, except when a record had some kind of connection to the band in the ways of a name or track. (In 1968, the Rolling Stones' "revolutionary" anthem "Street Fighting Man" had adapted the lyric of Martha and the Vandellas' "Dancing In The Street" from "Summer's here and the time is right for dancing in the street"  to "Summer's here and the time is right for fighting in the street".) Martha Reeves' solo records of the 1970s and later did not feature in his shows.

Retrieved from "https://peel.fandom.com/wiki/Martha_%26_The_Vandellas?oldid=136726"
Community content is available under CC-BY-SA unless otherwise noted.