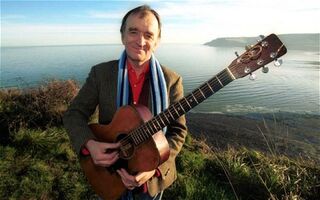 Martin Carthy MBE (born 21 May 1941) is an English folk singer and guitarist who has remained one of the most influential figures in British traditional music, inspiring contemporaries such as Bob Dylan and Paul Simon and later artists such as Richard Thompson since he emerged as a young musician in the early days of the folk revival.

He has also been involved with many musical collaborations. He has sung with The Watersons since 1972, was twice a member of the UK electric folk group Steeleye Span, was a member of the Albion Country Band 1973 line-up, with members from the Fairport Convention family and John Kirkpatrick, that recorded the Battle of the Field album, and was part of the innovative Brass Monkey ensemble, which mixed a range of brass instruments with Carthy's guitar and mandolin and John Kirkpatrick's accordion, melodeon and concertina.

For many years Carthy has enjoyed a creative partnership with fiddle player Dave Swarbrick and, more recently, Waterson:Carthy has provided the forum for a successful musical partnership with wife Norma Waterson together with their daughter Eliza Carthy. (Read more at Wikipedia.)

As Ken Garner observes in The Peel Sessions, Martin Carthy made his BBC session début in 1961 as accompanist to Shirley Collins on the Light Programme's "Roundabout", and "dozens of folk show sessions" followed. Yet the first of his nine solo sessions for Peel was in 1972 (and the last in 1983). Before that, he had recorded two Peel sessions and a Sunday Concert as a member of Steeleye Span, but his musical partnership with Dave Swarbrick (1966-69; it ended when Swarbrick joined Fairport Convention) was never featured on a Peel programme. This was probably because folk-style guests on Peel's programmes of the 1960s tended to be contemporary singer-songwriters rather than singers of traditional songs. This reflected the division in the folk scene of the time, although there were a few acts like Carthy and Swarbrick who appealed to both factions, among them Shirley and Dolly Collins and the Young Tradition, who both did sessions for Night Ride.

In the 1970s and later, Peel also played tracks featuring Carthy as a member of the Watersons, Brass Monkey and the Albion Country Band, whose "The Gallant Poacher", from the album "Battle of the Field", became a Peel favourite - he even said on-air that Island Records should issue it as a single. Another favourite was Carthy's solo rendition of the long ballad "Famous Flower of Serving Men", which he recorded on the 1972 LP "Shearwater" and performed twice in session, in 1973 and 1975. (The track also appeared on various folk anthologies, and Carthy re-recorded it for the 2004 album "Waiting For Angels". It was chosen as Best Traditional Track in the 2005 BBC Folk Awards.)

On the show of 09 February 1991, Peel mentioned that he had been phoned out of the blue by his hero Captain Beefheart who, Peel recounted,

Martin Carthy contributed to three episodes of the Radio 2 series As I Roved Out: A Century Of Folk Music, which Peel presented in 1999. The final programme of the 1999 TV series Sounds Of The Suburbs ends with Peel visiting Carthy, his wife Norma Waterson and their daughter Eliza Carthy at their home in Robin Hood's Bay, and his respect and admiration for the family's music is clear; he says it helped him "feel better about being English, at least for a while..."