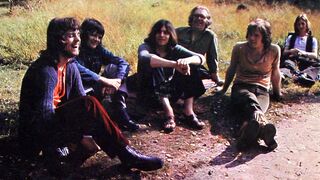 With Richard Thompson, Simon Nicol, and Ashley Hutchings from Fairport Convention, guitarist Mark Griffiths, drummer Gerry Conway, pedal steel player Gordon Huntley, and keyboardists Dolly Collins and Roger Coulam, Ian Matthews (aka Iain Matthews) recorded his debut solo album, Matthews' Southern Comfort, whose sound was rooted in American country music and rockabilly, in 1969. This was his first significant experience as a songwriter, although the band also covered the likes of Neil Young and Ian and Sylvia. He followed it up by forming a working band using the name of his first album, Matthews Southern Comfort (without the apostrophe), then released subsequent albums Second Spring (1969 – UK #52) and Later That Same Year (1970).

The band went through several different line-ups and toured extensively for the next two years, to general critical acclaim. They had one commercial success: a 1970 cover version of "Woodstock" (written by Joni Mitchell) was a number one hit single in the UK Singles Chart. It experienced heavy airplay in Canada reaching No. 5, as well as peaking at No. 23 on the Billboard singles charts in the United States in 1971. Afterwards, Matthews split with Southern Comfort, who went on to release three albums of their own on Harvest Records. (Read more at Wikipedia.)

Matthews Southern Comfort were frequently played on Top Gear during their lifespan, both session and tracks by the band appearing in Peel's playlists. But not only was Peel a supporter of the band, he may even have been responsible for its existence. In an interview with Mojo magazine (December 2015, p.130), Ian Matthews, who had just been fired by Fairport Convention in 1969 after the band decided to concentrate on its version of British traditional folk music, is quoted as saying: "I told John Peel the part of Fairport I loved was where we would interpret contemporary American songwriters. He said, 'Well maybe you ought to develop that as something of your own.'" And indeed this was what Ian Matthews did, first with Matthews Southern Comfort, then with Plainsong, and during his solo career.

Peel was the narrator of a documentary film (see below) made at an open-air festival in 1970, directed by Tony Palmer, and featuring live performances by Fairport Convention and Matthews Southern Comfort.

Retrieved from "https://peel.fandom.com/wiki/Matthews_Southern_Comfort?oldid=229519"
Community content is available under CC-BY-SA unless otherwise noted.