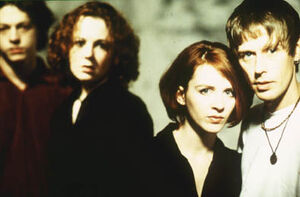 Melys are an indie band from Betwys-Y-Coed in Wales. Formed in 1996, they sing in both English and Welsh, and became virtually synonymous with Peel's programme in its later years: John not only revered their sound but he and his family became close friends with the group ([1]) (they labelled him "a cool dude" and "god of music" [2]). Andrea Parker (vocals) and Paul Adams (guitar and keyboards) were both the band's founders and the mainstay of its fluent, melodic character (the band's name means 'sweet' in Welsh). Their first releases were on the Ankst label, but Pinnacle signed them for their first LP, Rumours And Curses: when Pinnacle went bust in 1998 they were left without a deal, and set up Sylem (the band's name spelt backwards) in 1999.

Melys appeared to thrive on the edge playing live gave them: they recorded nine sessions for the Peel Show, five of which were live, and two concert recordings also went out. They gained five Festive Fifty entries, including the number one for 2001, Chinese Whispers: John had told the band a week earlier when they performed it live that he thought it was one of the best songs ever written.

Their 2005 LP Life's Too Short was dedicated to John ("through whom we met some great people who are now great friends. It was an honour."): following this, the band went on hiatus, during which Andrea and Paul raised their three children and ran a Welsh food restaurant. In 2009, Melys re-emerged to play a gig for John Peel Day in Bangor. [3]

"John was a very special person, close to our hearts and was a brilliant champion of new music and a fantastic man. We loved spending time with him and his family and consider ourselves honoured to have known him so well." (Paul Adams)

7. Live from Peel Acres. First broadcast: 29 August 2002 (Peel's Birthday Special Show). No repeats. JP was expecting to play a repeat and the band turned up to surprise him with a live session.

Retrieved from "https://peel.fandom.com/wiki/Melys?oldid=231283"
Community content is available under CC-BY-SA unless otherwise noted.