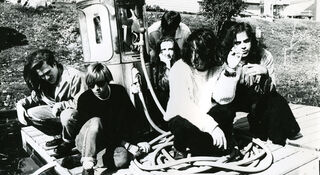 With their early records, Mercury Rev offered experimental, psychedelic rock, which gradually shifted to a melodic, ornate sound. Mercury Rev is often compared to The Flaming Lips, and in fact share close ties: soon after the band's formation, Donahue also joined the Flaming Lips as second guitarist and appeared on two of their albums; and since the 1990 album In a Priest Driven Ambulance, Dave Fridmann has co-produced every Flaming Lips studio album to date except 1993's Transmissions from the Satellite Heart.

Despite considerable critical acclaim, their early releases never gave Mercury Rev more than cult popularity, though they appeared on the smaller second stage at some 1993 Lollapalooza stops. Baker left after their second record, Boces (1993), citing musical and personal disputes; he later recorded an album as Shady. With his departure, the thematically darker and musically experimental features of the band began to disappear.

The 1998 release of the acclaimed Deserter's Songs (which featured appearances by Garth Hudson and Levon Helm of The Band) made Mercury Rev unexpected pop stars. In the UK, NME magazine made Deserter's Songs their Album of the Year. Donahue's earnest, high-pitched vocals and concentration on relatively concise, melodic songs gave the band's material an entirely new feel and much increased popularity (Deserter's Songs spawned three UK Top 40 singles).

Mercury Rev recorded five sessions over a ten year period and at the Reading festival JP introduced them as his favourite band. [1] At the same event, John recalled interviewing one of the band and remarking that this unnamed member made fun of him throughout [2]. In addition, they made the Festive Fifty three times, once with a song that John had never played (although Mary Anne Hobbs had done so when sitting in for him).

1995 was, however, a fallow period for the band with See You On The Other Side marking a change of direction that few appreciated: "The band recall Peel Session engineers gawping in disbelief when they rolled up to record I Only Have Eyes For You or songs from Willy Wonka (Peel himself was consistently supportive)." [3]

Retrieved from "https://peel.fandom.com/wiki/Mercury_Rev?oldid=232487"
Community content is available under CC-BY-SA unless otherwise noted.