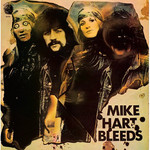 Michael William "Mike" Hart (3 December 1943 – 22 June 2016) was an English singer-songwriter and poet. In 1962 he founded the band The Roadrunners, before leaving in 1965 to join The Liverpool Scene, a poetry and music collective, with Adrian Henri, Andy Roberts, and Mike Evans. After recording one album with them he had a solo album, Mike Hart Bleeds, produced by John Peel, on Peel's Dandelion Records label. He recorded a second solo album with Dandelion; Basher, Chalky, Pongo and Me. In 1980 he began work on a third solo project. Five tracks were recorded, but none were released. They have been rediscovered, remastered, and put online.[1] He died on 22 June 2016 at the age of 72. (Read more at Wikipedia.)

Of all the members of the Liverpool Scene, it was Mike Hart who seemed to retain Peel's admiration. He contributed three tracks to the band's debut LP, Amazing Adventures Of...., which Peel produced, and did a solo Night Ride session which went out in May 1968. He also wrote the Liverpool Scene's first single, "Son, Son", which Peel played, but had left by the time the band did their first session in early 1969. Nevertheless the DJ produced Mike Hart's first LP and continued to play tracks from the singer's albums, even if they were among the more obscure releases on the Dandelion label and Mike Hart himself had left the music scene.

Peel had a special affection for the song "Almost Liverpool 8", from the LP he produced, Mike Hart Bleeds, choosing it as one of forty records to celebrate his fortieth birthday in August 1979 and later including it in the Peelenium for 1969. Another favourite from that album was "Arty's Wife", whose lyrics Peel admired (see comments below). Peel revisited these tracks in later decades and also played reissues of the material Hart had recorded with the Roadrunners during the 1960s Merseybeat boom.

One session only. No known commercial release.

Retrieved from "https://peel.fandom.com/wiki/Mike_Hart?oldid=246053"
Community content is available under CC-BY-SA unless otherwise noted.