Start a Wiki
Monty Python is a generic name applied to all the output of a group of comedians who were part of the Oxbridge Circus, a congregation of university graduates who broke into radio and television in the 1960s with a brand of topical and surreal humour. They comprised John Cleese (1939- ), Eric Idle (1943- ), Terry Jones (1942-2020), Michael Palin (1943- ), Graham Chapman (1941-1989), Terry Gilliam (1940- ) and in their last BBC series Neil Innes. The TV programmes, Monty Python's Flying Circus, ran from 1969 to 1974, the last being known merely as Monty Python, since Cleese had left the show by then, [1] and were notable for savage sketches, usually underpinned by Gilliam's somewhat frightening cartoons, which deliberately took Spike Milligan's philosophy of dispensing with a punchline to extraordinary lengths and added stream of consciousness features, such as the programme's end credits running immediately after the titles, and characters from one sketch wandering into another one. After the TV shows concluded, the team made the occasional film, including Monty Python And The Holy Grail (1975), Monty Python's Life Of Brian (1979), and Monty Python's The Meaning Of Life (1983). The death of Graham Chapman from cancer effectively brought the collaboration to a close. Many of the sketches (such as 'The Ministry Of Silly Walks,' The Cheese Shop,' 'Spam,' 'The Norwegian Blue Parrot' and 'Nudge Nudge') have passed into British comedy folklore, and a considerable number have also been issued as LPs in re-recordings . In 2010, Swedish band Bear Quartet issued an album called Monty Python (although the contents seem to contain no other reference to the team). 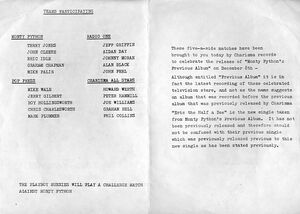 Although he never took part in the shows, Peel was a fan of the series from its inception ("It must unquestionably be the best programme ever") [2], played some of the sketches from the LP issues on Top Gear, and chose an extract from The Holy Grail for inclusion on It Makes Me Laugh. Cleese had also been a member of I'm Sorry, I'll Read That Again which lampooned JP on occasions. Although four years younger than Peel, Palin attended the same public school at Shrewsbury and contributed to John Peel's Record Box. It also appears that Idle was an occasional visitor to the Top Gear studio. [3] John also compèred the Pythons' appearance, alongside Slade and the Beach Boys, at the Bardney open-air pop festival in Lincoln on 28 May 1972, and is listed as being part of a Radio One five-a-side team on 28 November of that year to promote the Pythons' release of Monty Python's Previous Record. [1]

Retrieved from "https://peel.fandom.com/wiki/Monty_Python?oldid=236859"
Community content is available under CC-BY-SA unless otherwise noted.