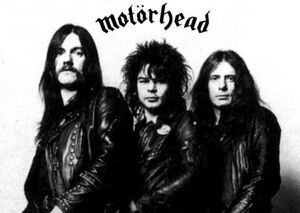 Motörhead or Motorhead are an English rock band formed in June 1975 by bassist, singer and songwriter Ian Fraser Kilmister, professionally known by his stage name Lemmy, who remained the sole constant member until his death on 29 December 2015 at the age of 70. The band are often considered a precursor to, or one of the earliest members of, the New Wave of British Heavy Metal, which re-energised heavy metal in the late 1970s and early 1980s. Motörhead are typically classified as heavy metal, and their fusion of punk rock into the genre helped to pioneer speed metal and thrash metal. Their lyrics typically cover such topics as war, good versus evil, abuse of power, promiscuous sex, substance abuse, and, most famously, gambling. The name "Motörhead" is a reference to users of the drug amphetamine. The band's distinctive fanged-face logo, with its oversized boar's tusks, chains, and spikes, was created by artist Joe Petagno in 1977 for the cover of the Motörhead album and has appeared in many variations on covers of ensuing albums. The fanged face has been referred to variously as "War-Pig" and "Snaggletooth".

Lemmy was originally a part of Hawkwind, a band that John supported in their formative years. When Lemmy was fired from Hawkwind and formed Motörhead (bringing with him a Hawkwind song of that name), Peel was keen to hear the group, and it appears that he was initially supportive of their punk/metal fusion: the fact that they were label-mates of the Damned on Chiswick might have been a factor in this. [1] When Motorhead signed for Bronze, which hitherto had included Manfred Mann's Earth Band in their roster, JP played their first single on the label, Louie Louie, adding appreciatively, "How comforting it is to know that Motorhead are still working away out there somewhere." [1] A session followed in September 1978: Peel's reception of it was rather muted, with only the use of the word "resounding" giving any indication of his opinion. In addition, he seemed vague as to whether the band had recorded for his show before. [2]

Their material appeared sporadically on Peel's show until the early 80s, but he then neglected to play them for many years, as it tended to stick to a formula he was unwilling to promote and which in any case was adequately covered by Tommy Vance. One airing of a live track from a flexidisc came with the (undoubtedly tongue in cheek) comment, "Poignant to a fault, that Motorhead." [2] In 1987, a listener requested Peel to play a Motorhead track on Peel 058 (BFBS), which he replied to by saying:

"This is for Nobby, who wrote asking for Motörhead. I'm afraid I gave all of my Motörhead records to the village playgroup."

Nonetheless, in his latter years there were occasional outings for the band on Kat's Karavan.

Retrieved from "https://peel.fandom.com/wiki/Motorhead?oldid=231065"
Community content is available under CC-BY-SA unless otherwise noted.