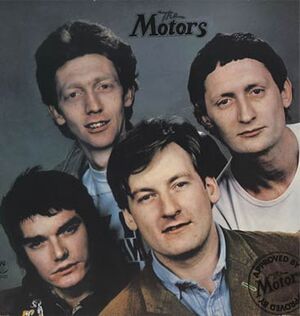 The Motors were a British pub rock band, formed in London in 1977 by former Ducks Deluxe members Nick Garvey and Andy McMaster together with guitarist Rob Hendry (who was replaced in May 1977 by Bram Tchaikovsky) and drummer Ricky Slaughter. Their biggest success was with the McMaster penned song "Airport", a number 4 UK hit single in 1978. Garvey and McMaster dissolved the band in 1982. (more on wikipedia)

The Motors' debut live performance was at the Marquee Club in March 1977 and they recorded three songs as their first session the same month (on 22 March 1977).  By May they had been signed to Virgin Records, and recorded material for another session on 12 September of that year. At the end of the year, Peel made his own 1977 Festive Fifty, listing Dancing The Night Away as his favourite track of the year and including three other songs from their debut LP. However, on his show on 04 August 1978, Peel was somewhat disappointed that the Motors had taken a new musical direction towards more of an ELO sound, which was nevertheless the year when they had their biggest hit Airport: it reached number 4 in the UK Singles Chart.

It appears the band did not entirely forget his part in their brief moment of fame: a picture of him appears on the cover of their 1980 flop single That's What John Said, which, ironically, Peel appears never to have played. Fortnightly magazine Smash Hits ran a competition in their May 29 1980 issue in which readers were invited to fill in the speech bubbles which featured on the single picture sleeve, "in the most entertaining way you can". The first prize was lunch with John Peel.[1]

Retrieved from "https://peel.fandom.com/wiki/Motors?oldid=235913"
Community content is available under CC-BY-SA unless otherwise noted.