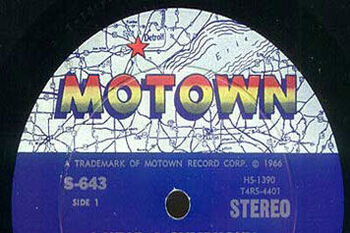 "Motown was about music for all people - white and black, blue and green, cops and the robbers. I was reluctant to have our music alienate anyone." (Berry Gordy Jr.)

Motown is a record label that originated in Detroit (hence the name, a contraction of Motortown) in 1959 and moved to Los Angeles in 1972. The founder, Berry Gordy Jr., had started his career writing the successful Lonely Teardrops for Jackie Wilson, but decided that his own label would be more profitable. At first, he set up two labels (Tamla and Motown) in order to avoid the kind of payola accusations (i.e. playing too many records released by the same company) that had destroyed the career of Alan Freed. Its first hit was Barrett Strong's Money (later successfully covered by the Flying Lizards), although they often had to issue records under subsidiary labels for reasons already stated (for example, the Supremes' first releases in the UK were on Stateside).

The label name was also used generically to refer to its distinctive sound: soul with a leaning to pop, complex basslines, a tambourine to accentuate the beat, and stratospheric vocal lines underpinned by backing singers, a technique that owed more than a little to gospel. The management worked their signings hard, and mixed lengthy recording sessions with gruelling tours, but emphasised the family aspect of the organisation and made household names of its acts (many of whom had been plucked from poverty to be groomed for stardom). on both sides of the Atlantic. The 60s saw a constant string of classic singles that were profitably issued, reissued and compiled onto the long-running Motown Chartbusters LP series.

The move to California alienated some on its roster, who elected to stay in Detroit: this also lost Motown its winning songwriting team of Holland-Dozier-Holland. However, on the move to the West Coast, the company branched out into the film industry: its premier diva Diana Ross made highly lucrative soundtrack tie-ins in Lady Sings The Blues, Mahogany and The Wiz. It was only in the 80s that Motown started losing money and was sold and re-sold to a succession of labels. Nevertheless, its peerless back catalogue has ensured a continuous stream of funds and it has recently been reactivated with new names. Only Stevie Wonder remains from its heyday in the 60s.

John was a constant supporter of 60s and 70s soul music, but confessed in a Disc & Music Echo article of January 1968, "I'm not terribly jazzed with Tamla Motown material. Four Tops' (Walk Away Renee) is very well done, and danceable, but I prefer the version by the Left Banke."[1] Nevertheless, he chose Marvin Gaye's Stubborn Kind Of Fellow for the Peelenium 1962 and was won over by Stevie Wonder's transition from pop 45s to thematic LPs with a conscience (both Talking Book and Songs In The Key Of Life are said to have been played by Peel in their entirety on release). In addition, the first and last records played on Top Gear were by Martha & The Vandellas (Love Bug Leave My Heart Alone).

The chart listings in the Kmentertainer, the magazine of the San Bernardino radio station KMEN, where Peel worked during 1966 and early 1967, include a fair number of Motown hit singles, which presumably were included in the chart-based playlists of "John Ravencroft"'s shows. Aside from these, and similiar "Fab 40" playlists of the daytime Radio London shows which he hosted in summer 1967, there is scant evidence that JP played Motown to any great extent (other than when it was prompted by a subsequent link to an artist he favoured: for instance, he once followed Billy Bragg's Levi Stubbs' Tears with a Four Tops song and claimed he'd always intended to do so). Part of the reason for this may lie in the fact that the genre was fanatically promoted by his airtime rival Tony Blackburn.

Not only Blackburn, but Johnnie Walker and many other pirate radio DJs had helped make Motown highly fashionable in the mid-1960s; although its influence was beginning to fade when Peel returned to Britain in 1967, it was still favoured by the Mods, who were sometimes violently hostile to the hippies with whom Peel then sympathised. In addition, British blues purists such as John Mayall disapproved of the on-stage showmanship which Motown exemplified, and the label's output began to be criticised as slick and commercial by soul fans who were more attracted by the earthier music of Aretha Franklin, James Brown or Stax-Volt artists such as Otis Redding. It was this kind of soul music, rather than Motown, which found its place in Peel's shows of the 1970s and beyond

Later in life, however, he revised his opinion, telling Walters in Peeling Back The Years that the Motown music Tony Blackburn had championed in the '60s now seemed to have stood the test of time better than the likes of Quicksilver Messenger Service, who had been featured in Peel's Top Gear playlists [2]. Moreover, other artists Peel played drew on Motown's legacy to varying degrees. The Beatles and Rolling Stones covered Motown material early in their careers and helped to popularise the label in the UK. The Undertones claim that their third LP Positive Touch was influenced by soul and Motown, whereas an early Manic Street Preachers song played on Kat's Karavan was called Motown Junk. In addition, the Very Things entered the 1986 Festive Fifty with This Is Motortown.

Retrieved from "https://peel.fandom.com/wiki/Motown?oldid=222538"
Community content is available under CC-BY-SA unless otherwise noted.