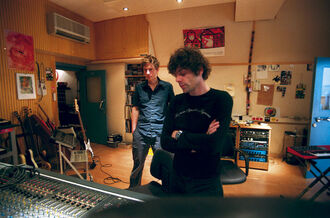 Mouse On Mars is an electronic music duo formed in 1993 by Jan St. Werner and Andi Toma. Their music is a blend of electronic genres including IDM, dub, krautrock breakbeat, and ambient, featuring heavy use of organic analog synth and cross-frequency modulation. Their music also features live instrumentation including strings, horns, drums, bass and guitar. Their first album, Vulvaland, was released in 1994 on the label Too Pure.,,,(Read more)

The band recorded four sessions for Kat's Karavan over a seven-year period, but failed to garner any entries in the Festive Fifty. Nonetheless, JP played their material consistently up to the year of their final studio session (2001).

Retrieved from "https://peel.fandom.com/wiki/Mouse_On_Mars?oldid=250031"
Community content is available under CC-BY-SA unless otherwise noted.