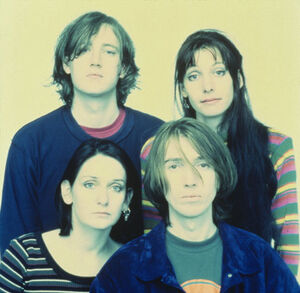 My Bloody Valentine are an alternative rock band formed in Dublin, Ireland, in 1983. Since 1987, the band's lineup has consisted of founding members Kevin Shields (vocals, guitar) and Colm Ó Cíosóig (drums), with Bilinda Butcher (vocals, guitar) and Debbie Googe (bass). Known for their use of distortion, pitch bending, and digital reverse reverb, My Bloody Valentine's musical progression resulted in the band creating and pioneering an alternative rock subgenre known as shoegazing.  Loveless, which has been described as the band's magnum opus, was a major critical success. However, the band were dropped by Creation Records after its release, due to the album's extensive production costs. In 1992, My Bloody Valentine signed to Island Records and recorded several albums worth of material, although remained largely inactive. Following the departure of Googe and Ó Cíosóig in 1995, My Bloody Valentine later disbanded in 1997 and then reunited in 2007.

In 1985, the band member Kevin Shields waited four hours for John Peel to come out of the BBC studio to give him his demo tape [1]. Since then Peel became a fan and regularly played their material. So concern of the band not producing any material for some time, that on 11 June 1993, he stated:

‘One of things I always dread, in a way, about bands that I really like becoming hugely famous is they seem to stop doing anything really. I mean, obviously a lot of them get into kind of serious drug abuse and disappear by and large. But the bands that you care for, as I say, it’s distressing when they become famous and don’t make records anymore. Whatever became of My Bloody Valentine are they still out there somewhere?

Retrieved from "https://peel.fandom.com/wiki/My_Bloody_Valentine?oldid=241321"
Community content is available under CC-BY-SA unless otherwise noted.