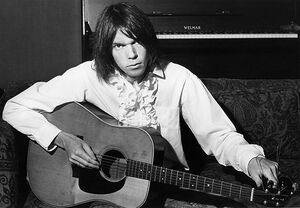 Neil Percival Young (born November 12, 1945) is a Canadian singer-songwriter. He began performing in a group covering Shadows instrumentals in Canada in 1960, before moving to California in 1966, where he co-founded the band Buffalo Springfield along with Stephen Stills and Richie Furay, later joining Crosby, Stills & Nash as a fourth member in 1969. He forged a successful and acclaimed solo career, releasing his first album in 1968; his career has since spanned over 40 years and 35 studio albums, with a continual and uncompromising exploration of musical styles including country music, alternative rock and grunge ... (read more at Wikipedia)

Peel first met Neil Young on April 15, 1966, when the DJ was working at KMEN in California and Young was a member of Buffalo Springfield, who were supporting the Byrds at the Swing Auditorium in San Bernardino.[1] [2] In a 1976 column for Sounds, Peel wrote:

“I recollect chattering away at young Neil Young (as he then was) for some minutes and being told that this was the first proper concert the band had played. A few years later and back in London the very same Neil Young came round, propelled by a dynamic record company wallah, to Peel Acres ... They stayed for an hour, in the course of which Neil said not a word.”[3]

Between his two encounters with Young, Peel had praised the singer's work in his newspaper columns and had regularly played tracks by him, both with Buffalo Springfield and as a solo artist, on his BBC shows, so the DJ was understandably perplexed by Young's behaviour. Nevertheless, Peel would be a long-time admirer of Young’s work, “particularly the noisier things that he does.”[4] On his 19 October 1991 show, the DJ commented:

“I've been saying for years that really about the only person who's survived stardom and continued making interesting music, for me anyway, has been Neil Young … He's made bad records and records that I've not cared for very much, but nevertheless he seems to be getting better and better and better. What I like about him is that you feel he can hear certain noises in his head that he knows are somewhere in that guitar and by God he's going to get them out of it if it kills him."

In 1975, Peel had made the musician’s ‘Zuma’ LP one of his five records of the year.[5] The following year, he described the musician’s 1969 album 'Everybody Knows This Is Nowhere' as “one of the ten greatest LPs of all time”.[6] Over two decades later, in 1997, Young’s 1991 'Arc-Weld' live triple CD was included on a Top 20 Albums list Peel put together for the Guardian newspaper. He also picked the track 'Like A Hurricane' for his self-selected 1977 Festive Fifty and among 40 records for his 40th birthday in 1979 [7], as well as 'Rockin' In The Free World' as a Ten Of The Best video for MTV in 1995.

After the DJ’s death, Young demonstrated his enduring appeal across the decades by returning to the Festive Fifty for the first time since 1978 in the 2012 Festive Fifty on Dandelion Radio.

(JP: 'I've always...ever since he started with Buffalo Springfield admired what Neil Young does. Not everything, I mean he makes the occasional poor LP, as far as I'm concerned, and may even make two in a row, but then he'll come back with a third one and do something that's really outstanding.')

Retrieved from "https://peel.fandom.com/wiki/Neil_Young?oldid=275841"
Community content is available under CC-BY-SA unless otherwise noted.