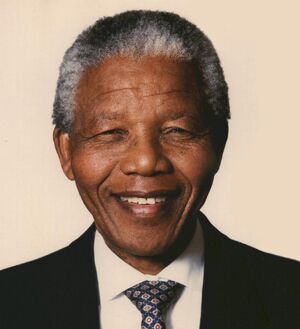 Nelson Rolihlahla Mandela (Xhosa pronunciation: [xoˈliːɬaɬa manˈdeːla]) (18 July 1918 – 5 December 2013) was a South African anti-apartheid revolutionary who was imprisoned as well as a politician and philanthropist who served as President of South Africa from 1994 to 1999. He was the first black South African to hold the office, and the first elected in a fully representative election. His government focused on dismantling the legacy of apartheid through tackling institutionalised racism, poverty and inequality, and fostering racial reconciliation. Politically an African nationalist and democratic socialist, he served as the President of the African National Congress (ANC) from 1991 to 1997. Internationally, Mandela was the Secretary General of the Non-Aligned Movement from 1998 to 1999. Although Mandela was a controversial figure for much of his life, he became widely popular following his release. Despite critics who continued to denounce him as a communist sympathiser and terrorist, he gained international acclaim for his activism, having received more than 250 honours, including the 1993 Nobel Peace Prize, the US Presidential Medal of Freedom, the Soviet Order of Lenin, and the Bharat Ratna. He is held in deep respect within South Africa, where he is often referred to by his Xhosa clan name, Madiba, or as Tata ("Father"); he is often described as "the father of the nation".

As a supporter of the anti-apartheid movement in South Africa, Peel attended the Nelson Mandela 70th Birthday Tribute Concert at Wembley Stadium and commented on his show of 07 June 1988 whether artists who performed at the show know the significance of the concert and whether they will remember the importance of Nelson Mandela, who was in prison. After Mandela was released from prison in 1990, Peel remarked on his show from 10 July 1997 that Nelson Mandela was 'the one man on earth that I would really like to meet.'

Retrieved from "https://peel.fandom.com/wiki/Nelson_Mandela?oldid=222589"
Community content is available under CC-BY-SA unless otherwise noted.