(This page is about the German female singer who performed with Velvet Underground. For the American techno producer of the same name, see Nico(2). For the British drum and bass producer, see Nico(3).) 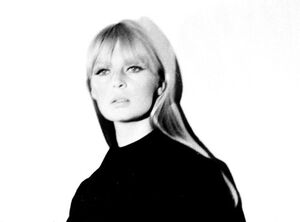 Nico (born Christa Päffgen; 16 October 1938 – 18 July 1988) was a German singer-songwriter, lyricist, composer, musician, fashion model, and actress, who initially rose to fame as a Warhol Superstar in the 1960s. She is known for both her vocal collaboration on the Velvet Underground's debut album, The Velvet Underground & Nico (1967), and her work as a solo artist from the late 1960s through the 1980s. She also had roles in several films, including Federico Fellini's La Dolce Vita (1960) and Andy Warhol's Chelsea Girls (1966), as herself. Nico died in July 1988, as a result of a heart attack while vacationing on Ibiza with her son.

Peel first got to hear Nico when she shared the billing on the Velvet Underground's debut album, although she only appeared on three of its tracks. He may also have heard her first solo album Chelsea Girl in 1967, although he is not known to have played any tracks from it on his shows. Tracks from her 1969 album for Elektra, The Marble Index and the 1970 collection on Reprise, Desertshore, did receive airplay on Top Gear.

Peel was so impressed with her voice that he invited her to perform a session on his show in 1971, and again in 1974, by which time she had become a cult figure and was recording for Island Records. (One of her Peel Session tracks, Secret Side was only released for the first time on a re-issue of her 1974 The End album, in 2012).  Meeting her in 1971, he was less impressed with her personality, particularly when she got up and walked out of the studio in the middle of a conversation with him. As Sheila Ravenscroft recounts in Margrave of the Marshes (p.182) Peel wrote in his diary (on 4 February 1971) that Nico was "stunningly rude" and described her as "Andy Warhol NY super cool rat shit."

She became notorious for her drug habit, yet retained her cult reputation into the punk era and played at least once on the same bill as The Fall, in 1981 (account here). She also lived in Manchester (with John Cooper Clarke) at the time the city was home to Peel favourites such as The Buzzcocks, Joy Division, New Order and The Smiths, although her material only made an occasional appearance in Peel's later playlists.