(This page is about the British band of 1960s. For the Seattle-based band of the same name, see Nirvana.) 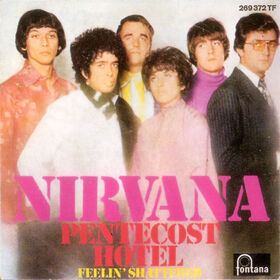 Nirvana (the first band to go under that name) were a London-based group formed around the songwriting partnership of an Irishman, Patrick Campbell-Lyons, and a Greek, Alex Spyropolous, and including a classical cellist as well as standard pop instrumentation. They emerged in 1967 as one of the first groups to sign to Island Records (others were Traffic and Art, later Spooky Tooth). They released two singles, "Tiny Goddess" and "Pentecost Hotel", which both received plenty of airplay on pirate radio (Radio London and Radio Caroline respectively) without making the UK charts, and an LP, The Story Of Simon Simopath, one of the earliest concept albums of its era. A third single, "Rainbow Chaser", was a minor UK hit in 1968, which year also saw the release of the LP The Existence of Chance Is Everything and Nothing While the Greatest Achievement Is the Living of Life, and so Say All of Us, which is, understandably, usually known simply as All Of Us.

After this, the band left Island and issued a couple of lesser-known albums on Pye, with Campbell-Lyons leaving before Nirvana finally split up in 1972. They reformed in 1985, toured Europe, where, after cover versions of their songs by artists such as Francoise Hardy, their "baroque pop" style was still appreciated, and issued some new material. By the millennium their early recordings had been reissued on CD and they were popular with collectors of 1960s music. According to Wikipedia, a lawsuit brought by the group against the Seattle band Nirvana led to an out-of-court settlement in 1992. This meant that, until the death of Kurt Cobain, two stylistically very different groups called Nirvana were performing and recording.

Peel was taken with Nirvana's first two singles, making "Tiny Goddess" his Radio London "Climber" [1] and giving high praise to "Pentecost Hotel" both in International Times and on the first Top Gear [2], where he called it "one of the most beautiful records you will ever hear". The band did a session for the programme in late 1967 and were interviewed as studio guests on the Night Ride of 18 September 1968; but they were a pop rather than rock band, unsuited to the harder and heavier music which was dominant at the end of the decade, so they never became regular session guests on Peel's shows.

Retrieved from "https://peel.fandom.com/wiki/Nirvana(2)?oldid=239826"
Community content is available under CC-BY-SA unless otherwise noted.