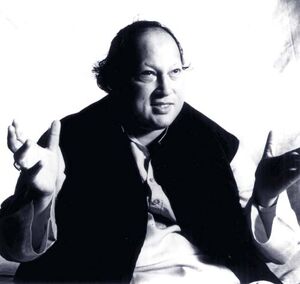 Nusrat Fateh Ali Khan (Urdu: نصرت فتح علی خان‎; 13 October 1948 – 16 August 1997), a Pakistani musician, was primarily a singer of Qawwali, the devotional music of the Sufis. Considered one of the greatest voices ever recorded, he possessed an extraordinary range of vocal abilities and could perform at a high level of intensity for several hours. Extending the 600-year old Qawwali tradition of his family, Khan is widely credited with introducing Qawwali music to international audiences. He is popularly known as "Shahenshah-e-Qawwali", meaning "The King of Kings of Qawwali". Born in Faisalabad, Pakistan, Khan had his first public performance at age of 16, at his father's chelum. He became the head of the family qawwali party in 1971. He was signed by Oriental Star Agencies, Birmingham, England, in the early 1980s. Khan went on to release movie scores and albums in Europe, India, Japan, Pakistan, and the U.S.A. He engaged in collaborations and experiments with Western artists, becoming a well-known world music artist. He toured extensively, performing in over 40 countries.

Peel was a great fan of Nusrat Fateh Ali Khan's singing voice. On his show from 17 July 1985, he mentioned regularly listening to Nusrat's tape that was sent by the record label Oriental Star Agency. Peel's colleague Andy Kershaw was also a fan of Nusrat's music and would commonly play his songs on his show.

Retrieved from "https://peel.fandom.com/wiki/Nusrat_Fateh_Ali_Khan?oldid=224369"
Community content is available under CC-BY-SA unless otherwise noted.