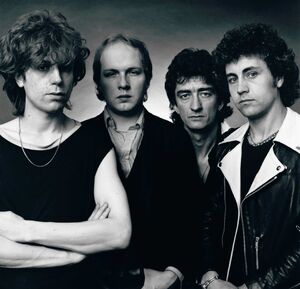 The Only Ones are an English rock band, formed in London in 1976 by Peter Perrett. Initially active in the late 1970s, they were associated with punk rock yet straddled the musical territory in between punk, power pop and rock, with noticeable influences from psychedelia (qualities they shared with contemporaries the Soft Boys). They are best known for their 1978 single "Another Girl, Another Planet". The band split in 1981 after releasing three albums.

The group unexpectedly reformed in 2007 for a comeback tour, following the use of "Another Girl, Another Planet" in a Vodafone advert. They continued touring throughout 2008 and 2009. Their last live appearance to date was in 2012.

Peel played the group's self-released debut single when issued in summer 1977 and continued to support the group over the next few years, booking them for a total of four sessions. He described perennial Festive 50 favourite 'Another Girl, Another Planet' as an "artful little caprice" [2] but wasn't sure what to make of the group's 1980 single "Fools", a duet recorded with Pauline Murray, formerly of Penetration:

"still haven't come to terms with the new Only Ones single featuring Pauline Murray. I see it as a sort of a bit of a jape. It's quite an amiable record in a way but not what one expects at all. Nothing wrong with that I suppose. One looks forward to the forthcoming LP though."

This didn't dissuade him from playing it on at least two occasions though upon release.

In 1989 Peel was impressed with the release of a live album recorded in 1977 ("genuinely a first class LP" (15 August 1989)) and a few years later mentioned that the group's Peel sessions LP was amongst his favourite Strange Fruit releases [3]. In March 1996 Peel played several tracks from the BBC Radio 1 Live In Concert release of a 1978 set from the band: "A most welcome release... The temptation is actually to just let this run because it sounds so good" he said on 16 March 1996 (BFBS).

Peel also played at least one track from England's Glory, the band Perrett fronted immediately before forming the Only Ones and whose demo recordings were first issued in the late Eighties. [4]

The list below was researched only from the database of this site, Lorcan's Tracklistings Archive and Ken Garner's Peel Sessions (pp.218, 220). It is almost certainly incomplete. Please add further information if known.

Retrieved from "https://peel.fandom.com/wiki/Only_Ones?oldid=224898"
Community content is available under CC-BY-SA unless otherwise noted.