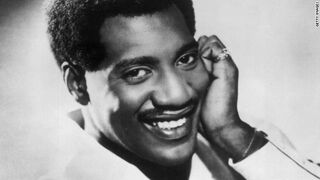 Otis Ray Redding, Jr. (September 9, 1941 – December 10, 1967) was an American singer, songwriter, record producer, arranger and talent scout. He is considered one of the greatest singers in popular music and a major artist in soul and rhythm and blues. His singing style was powerfully influential among soul artists of 1960s and helped exemplify the Stax Sound. Initially popular mainly with African Americans, Redding later reached the broader American popular music audience. He and his group first played small gigs in the South, then debuted in the western United States at LA's popular Whisky a Go Go. They later performed in Paris, London and other European cities. After appearing at the 1967 Monterey Pop Festival Redding wrote and recorded the iconic "(Sittin' On) The Dock of the Bay" with Steve Cropper. The song became the first posthumous number-one record on both the Billboard Hot 100 and R&B charts after his death in a plane crash. The Dock of the Bay became the first posthumous album to reach number one on the UK Albums Chart. (Read more at Wikipedia.)

The Otis Redding track 'Ole Man Trouble' was a major favourite of Peel, who selected it as one of 40 songs for his 40th birthday and for the 1965 Peelenium. Regular listeners were familiar with his story about hearing the song for the first time, as recounted to Andy Peebles in My Top Ten (1984):

I used to live in Oklahoma and work for a radio station just outside Oklahoma City.[1] I used to do gigs on Indian reservations in the south of the state; it’s one of these things which sounds “come on, he’s making this up”, but it is true. And I used to work with a band called Dann Yankee & The Carpetbaggers, who were wonderful people, and we were driving back from the gig, it must have been 3 or 4 o’clock in the morning, listening to a radio station coming from Memphis, and this next record came on. ... We actually pulled over to the side of the road ... we were just transfixed.[2]

Although Peel was familiar with Redding from his years in America, the DJ focused on other kinds of music on his Perfumed Garden and Top Gear shows when he returned to the UK in 1967, the year of the singer's death. (Nevertheless, Redding had some credibility with musicans and audiences of the hippy era, and he was invited to perform at the celebrated 1967 Monterey Pop Festival, one of the key events of the so-called "summer of love".)  In later decades, when soul became a more regular feature of Peel's programmes, Redding was heard relatively often, including festive Christmas songs and a second Peelenium choice in the form of 'Try A Little Tenderness'. In addition, the Detroit Cobras made #15 in the 2001 Festive Fifty with a cover version of Redding's early hit Shout Bama Lama.

Retrieved from "https://peel.fandom.com/wiki/Otis_Redding?oldid=247514"
Community content is available under CC-BY-SA unless otherwise noted.